It's been a busy old day today: laundry done, stainless polished, hull cleaned by divers in readiness for the Galapagos, provisioning done, more of which later. We finally escaped the marina at around 1.30pm to head for lunch at Panama City fish market, Merkardo de Mariscos . It's very popular with locals, vibrant and colourful serving ice cold beers and various cerviche. We sampled prawn, octopus and squid dishes all washed down with local Atlas beer. Excellent. 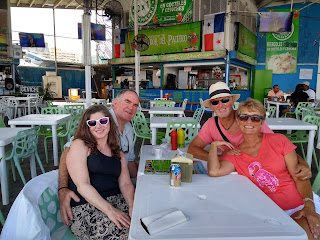 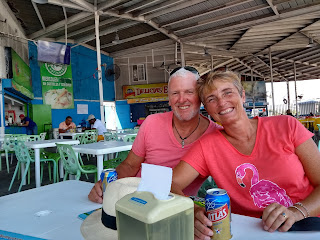 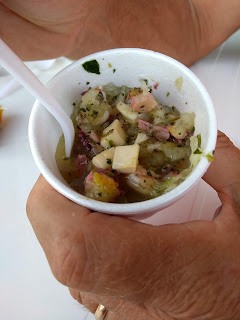 After a delicious lunch of the freshest cerviche we wandered along to the neighbouring market hall to get some fish. Red Snapper today, beautiful big specimens with easily enough flesh to serve 4. 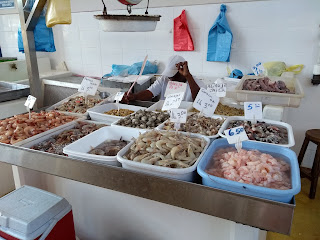 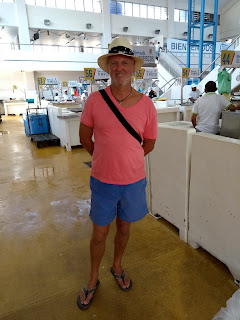 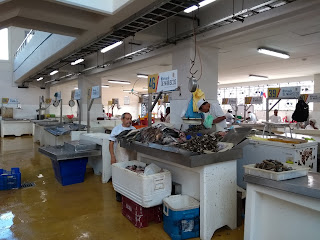 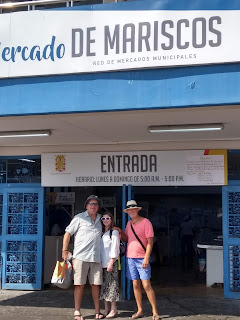 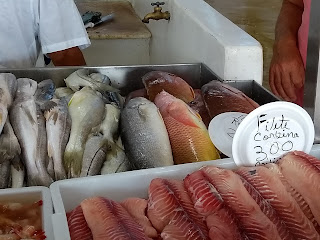 And then the highlight of the day .... a visit to a local supermarket in a rather dodgy area. We'd used a taxi to get to the fish market, driven by a Panamanian named Roosevelt. A great guy who, when we mentioned we needed to provision, said he would collect us after lunch and take us to a local store he knew. So off we went, heading into an apparent ghetto with unmade roads, bullet-scarred walls and stray dogs. Jackie locked the car door on the approach to the car park, a scruffy parking lot surrounded by a 20' high chain link fence with no sign of any supermarket to be seen. We hesitantly climbed out, checking with Roosevelt that he wouldn't leave us (!!) and crossed the street to enter a non-descript doorway. Lo and behold inside it opened into a three-storey, modern supermarket with low prices and good produce. $350 later we climbed into the well-laden taxi to return to the marina but Paul and I hopped out in the old town leaving Dan and Jackie to deal with the groceries. We felt very guilty but wanted to see the historic area before we left.

The old town dates back to the 1600s and there is some lovely architecture. Two or three of the churches and other buildings have suffered the ravages of fire and earthquakes over the centuries but are now preserved as historic monuments. 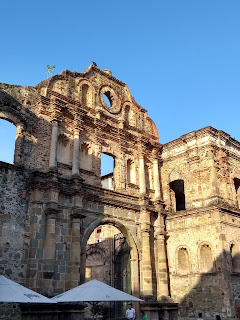 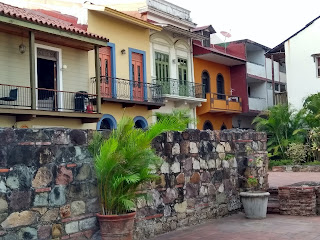 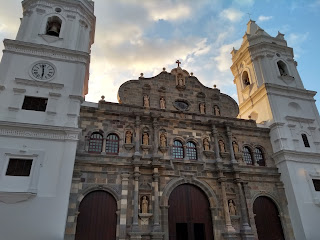 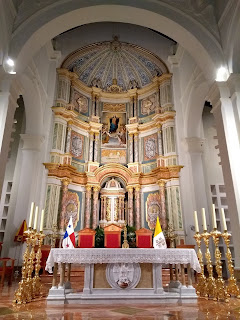 The beautiful cathedral is studded with mother of pearl, it doesn't really show in the photos, and yes the candlesticks are solid gold!

It's an attractive and colourful enclave sandwiched between the modern skyscrapers and the poverty-ridden suburbs, full of trendy bars and restaurants. I even treated myself  to a Panama hat while we were there. 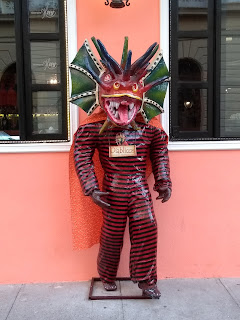 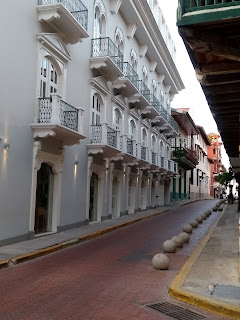 We're heading off to the Las Perlas islands tomorrow and may not have decent communications again until the Galapagos in two weeks time. So, our apologies for the lack of posts just in case!