Seals, seals, seals, everywhere! Within 2 minutes of anchoring we had several inquisitive seals swimming around the boat, snorting darkness while they assessed whether there was anyway they could get on board. Fortunately we had the bathing platform raised so their search was in vain, unlike friends who have a catamaran with steps down to the water who returned to find five seals asleep on their cockpit cushions! Cute but rather smelly ....

The bay is packed with seals and sealions, all playing in the water and sleeping in the shade. Myriad red-legged crabs litter the rocks and black iguana wander around the place. Frigate birds and blue footed Boobies circle above us and spotted eagle rays and turtles are swimming lazily by. A veritable treasure trove of wildlife. 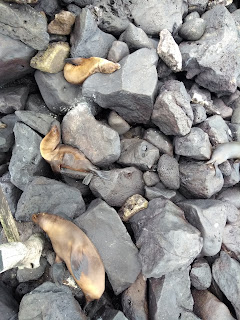 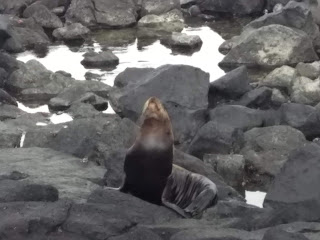 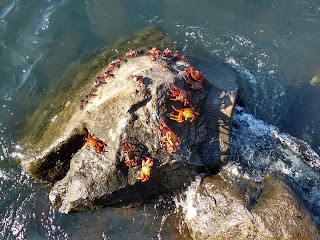 This morning we have strolled along to the Charles Darwin Interpretative Centre and learned a lot about the man himself (he departed Devonport in September 1831 and arrived here in December 1835) and his theories on evolution. All very interesting .. for example thirteen species of finches now live on the island from an individual breed. 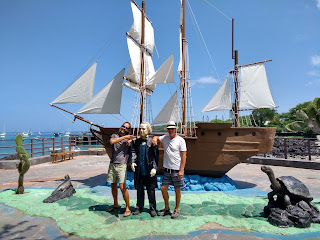 Our visit to the Charles Darwin Interpretative Centre was very interesting and gave us a good understanding of the struggles over the centuries to colonise these islands. Most ended in failure with the hard climatic conditions the settlers faced putting paid to many initiatives … sugar growing, sulphur extraction, cattle raising, tortoise oil … the final one being used for street lighting apparently. A number of species, including the giant tortoises, were hunted to almost extinction but fortunately survived. In the early century a penal colony was established on Isabella island, and a harsher environment is harder to imagine. It closed in 1954. And Baltra island has been used as a stratgeic airfield over the years given it's proximity to the Panama Canal. It's now the Galapagos islands main airport.


Pollution, in particular plastics, is a major concern for the islands and it was lovely to see the fun way children are being educated about the importance of recycling … a blue-footed booby made entirely of recycled plastic. 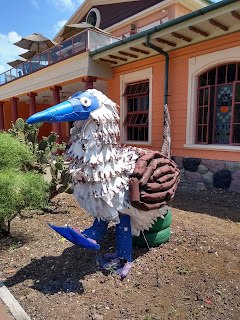 A trail from the centre led through the countryside (think volcanic rocks, cacti and indigenous trees and plants) to a local beach recommended for good snorkelling so off we went. 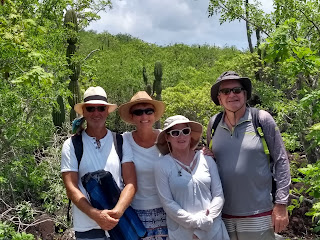 It wasn't the easiest of entries/exits from the sea over rocks but we managed it and snorkelled for a while … lots of fish but the highlight had to be swimming with a seal that most definitely played to its audience. It was within a few inches of Paul and he got some great video of it which we will try to upload. All was going well until he was bitten by a fish! We then retreated back to the beach.