We were awake bright and early in readiness for the return of a canal advisor. We got a different one today, slightly easier going than the first guy which was good given we had him on board for 8 hours.

Departing the raft of boats in Gatun Lake we motored 28 miles across the lake in a line to the next lock, Pedro Miguel, in exactly four hours, looking out for crocodiles on the shore but didn't see any. We had to provide the advisor with a hot meal each today so I knocked together a tasty frittata which we ate as brunch. He seemed to approve! 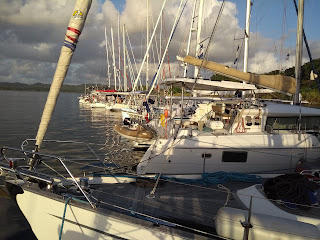 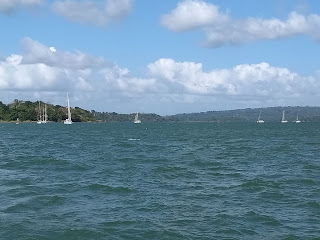 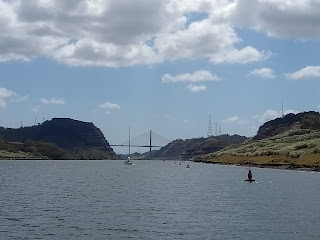 In no time at all we seemed to have reached the next lock and so rafted up alongside the same three boats to transit the lock. The central boat, a catamaran piloted by Helmutt from Germany, was responsible for driving the raft forward under the direction of the chief advisor, manoeuvring us all from one side to the other to pick up lines, with only assistance needed from the outside two boats to slow us down or in any difficulties. Helmut did a sterling job, and this lock went smoothly just like the three yesterday.

8 metres lower we exited the lock into a small lake and motored across this tied together before we entered the final set of two locks, the Miraflores Locks, before our exit out into the Pacific Ocean! 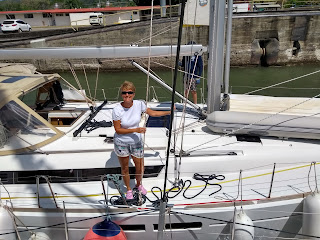 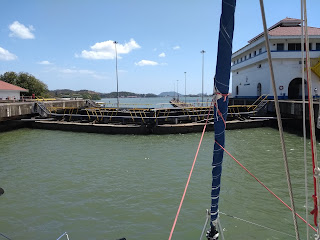 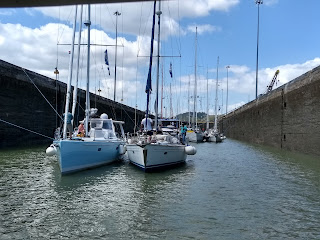 The first of these locks went as smoothly as the previous four, with the possible exception of a lazy line handler on the canal wall working with Paul. While all the others acted quickly, this guy seemed to be in no great hurry, strolling along. This came back to bite our raft in the final lock. The canal line handlers walk between the two locks holding onto our lines as we motor forward into the next line. This guy didn't keep up, no surprise there, and had to drop our stern line into the canal!

The final lock has a strong current running in it, between 4 and 5 knots, because of the mixing of fresh water from Gatun Lake and saltwater from the Pacific. Our raft of boats slewed to the right and in the absence of a stern line on our boat, there was nothing to stop the boat on that side hitting the walk! Fortunately the big fenders we had all been provided with prevented any damage and with all three boats motoring astern we managed to get things under control and the raft centred back in the lock with a new stern line attached to Tumi. A hairy few minutes but the only ones in the entire transit so not too bad!

The admin building at Miraflores has a camera mounted on the roof and so several friends were able to watch our approach and sent us photos! Thank you all! Tumi is the boat on the right closest to the camera. We were out on deck waving but the resolution isn't great. 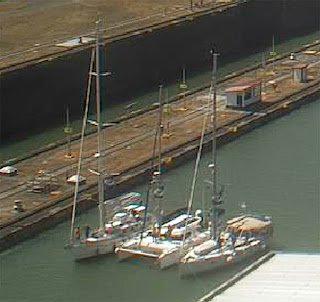 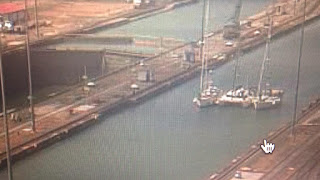 So now we're tied up in La Playita marina on the outskirts of Panama City having sailed past the spectacular skyline of this modern city yesterday afternoon. 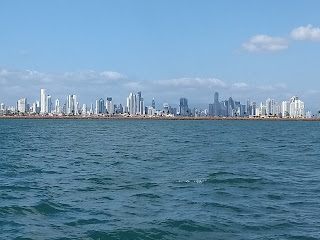 The whole of the Pacific Ocean lies ahead but we feel very proud to have sailed Tumi safely from England this far, and to have brought our own boat through the Panama Canal. Undoubtedly a once in a lifetime experience.