We had to motorsail over to Isla Isabela there yet again being no wind. As dusk fell and with our steaming lights lighting up the bow, half a dozen boobies, of the blue-footed kind this time, circled looking to roost but we chased them off: The mess last time from our overnight visitors wasn’t something we wanted to repeat. As a friend has pointed out, even the boobies out here have political leanings, either red or blue! Arriving at just after 8am we had to wait three hours for the immigration official to collect our paperwork and then we were good to go. 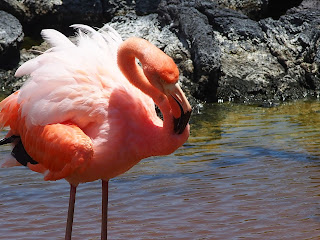 Isabela is the largest of the islands in the Galapagos and is shaped like a seahorse. Being on the western fringes it is one of the newest Islands and is still volcanically active, having five volcanoes along its spine. It only has 3000 inhabitants centered around one small town called Puerto Vilamil, named after the chap who initially colonized the island. A sand main street lined with tour operators and small restaurants greets you, all very low key yet friendly. Flamingos inhabit salt marshes just behind the main street, their plumage being the most beautiful shade of pink, contrasting against the brackish water and blue skies. Quite how they balance on one leg while asleep, wobbling with the breeze, is beyond us but they do! 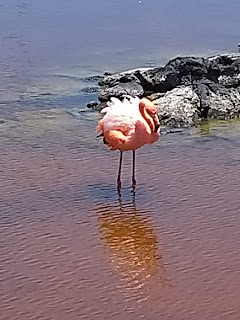 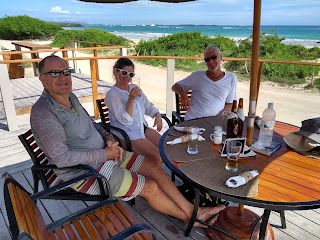 A beautiful beach stretches for miles from the town running west, pristine white sands with intermittent black volcanic rocks and turquoise seas. Very striking. We stumbled on a stylish boutique hotel and enjoyed lunch there yesterday, admiring the panorama in front of us. We got chatting to the owner and he has invited us for dinner tonight.


This morning saw us up bright and early in readiness for a tour to the largest volcano, Sierra Negra. We were collected from the pier at 7am and travelled 30 minutes or so inland, climbing some 600 meters. As with San Cristobal, once we left the shore and its immediate hinterland the vegetation surprised us, so lush and green. The islanders grow tomatoes, bananas, yams and oranges, all for island use with the exception of the oranges which are exported to Santa Cruz. It’s currently the winter here, hot and humid with quite a lot of rainfall but is dry and arid in the summer season.


After being dropped off at the national park ranger station we started the climb up to the crater of Sierra Negra, a pleasant walk through the countryside with spectacular views back down to the coast. Fortunately for us there was quite a lot of cloud around which meant we didn't bake in the sunshine. Our first view of the crater was breathtaking … a circle of lava surrounded by verdant green cliffs. It is vast, over 14 kilometres across, the second largest crater on the planet, and last erupted only in June 2018 making it one of the most active volcanoes in the Galapagos. 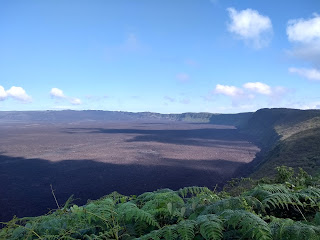 We walked a mile or so along the rim, marvelling at the power of nature, before peeling off on a trail that drops to another volcano called Chico, passing fumeroles from the last time that erupted in 1989. Before long we dropped down from the generated region into a lava field from that last eruption, a lunar landscape of jagged rocks, lava tunnels and mini-craters, predominantly black but with areas of red where iron is present, yellow for sulphur and white for magnesium. This inhospitable terrain stretches for miles and we must have walked several of them! What an incredible experience, a real highlight of our trip so far. 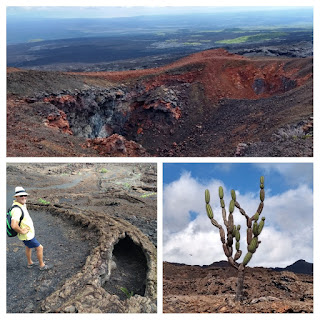 As on San Cristobal, fur seals and sealions abound, and there are even more marine iguanas than we saw before. One road junction is aptly named Iguana Crossing, there being more iguanas crossing there than cars! Far more, a steady stream heading from the beach to the mangroves and back again.


Isabela is also home to the Galapagos penguin, a small penguin that came up with the Humboldt Curent from the South Pole and has adapted to life in these hot temperatures. They're agile little devils, whizzing through the water at great speed, seemingly at one with all the seals and sealions in the Bay. 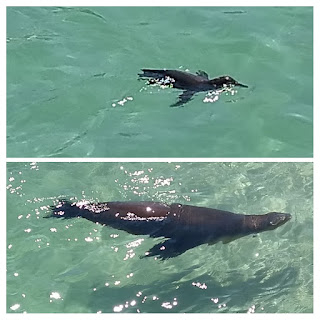