We decided to stay one more day in La Isla Isabela as we are enjoying it so much, and so we booked ourselves onto a kayak tour this morning and toured around Los Tintoreras, a group of small islands next to the anchorage. We paddled across the bay and tied the kayaks up to a buoy in a small cove. As we went overboard, the first thing that we saw was a huge stingray below us. 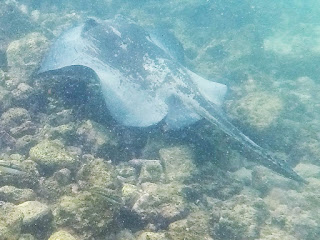 Before long, we had come across three very large turtles too. 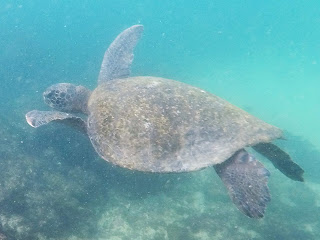 And the ubiquitous inquisitive seals ... 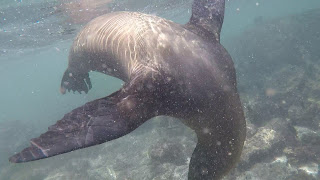 We swam around for quite a while, sort of expecting to see a shark, but very relieved that we did not! One of our friends messaged us yesterday to say that they had reset their anchor in Santa Cruz (the next island we are visiting). Nicky dived over the anchor to see that it was well set and a shark that was about the same size as her came up behind her and bit off part of her flipper. Nicky kicked at the shark with her other flipper and the shark went away, leaving her very shocked and anxious to get out of the water! We won't be swimming off the back of the boat when we get there tomorrow. Incidentally, the anchorage where we are now had an 8 metre Tiger Shark swimming through the other day.

We then continued on our tour and came across a family of three Galapagos penguins. 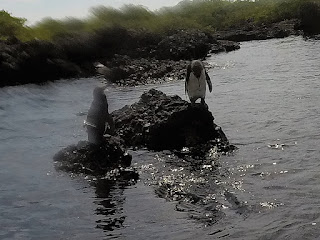 It was a great way to interact with the wildlife, and now we feel that we have seen a lot of Isla Isabela and what it has to offer. We will leave here first thing in the morning, heading for Santa Cruz via Isla Tortuga (the remains of a caldera which has left a crescent of land with a deep water crater). We'll take lots of pictures as we go by.

The weird thing is that in less than a week, we will be setting off on the longest leg of our odyssey. As yet it hasn't really registered on the panic scale, we hope it will be a happy journey without incident. We know we will have to motor through the doldrums to find the trade winds, and then we will fly the Parasailor as much as we can. Speaking of the Parasailor this is what it looks like on Tumi. 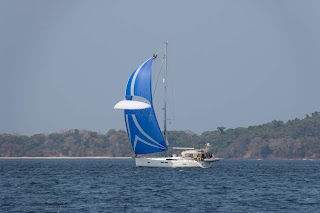