After a 48 hour delay because of high winds and short, big seas (5 metres every 2-3 seconds) the Colombian Coastguard finally lifted their warning and most of the rally departed yesterday at 10am. It was another racing start and so everyone was milling around just inside the start line until the horn sounded and we were off on the second leg to the San Blas islands. Weather conditions looked to be reasonable with decreasing seas and winds but we knew it was still going to be a challenging sail and so it has proved to be. The messy, following seas are making for an uncomfortable ride with a corkscrew motion making it nigh on impossible to get any sleep. So as day two dawns, we're both tired and yet still have another 115miles to go. If we keep up our current average speed of just under 7 knots we should be there by midnight or thereabouts.


Tumi is not a particularly fast boat for downwind sailing, unless we can fly the new Parasailor of course which is not the case in the current conditions! Most of the other boats have twin headsails and by deploying these both, one either side of the boat, they create an effective double sail and they all leave us standing. Despite being ahead of several of them on the first 6 hours from Santa Marta until Barranquilla where we had to change course, they have passed us overnight and are now a few miles ahead of us.


During the night, as Tumi and we were pitching and rolling in the big seas, we heard a bang and shot out into the cockpit to investigate both fearing it was the repairs made to the whisker pole in Santa Marta giving way. But no, the active jib sheet had given way (snapped) at a pulley, such was the strain on it with one particularly large wave. So Paul had to don his lifejacket and a safety harness to go forward onto the deck, get the whisker pole and the remainder of the jib sheet under control, then retrieve his tracing rods from the sail locker in the bow to feed the broken line through the pulleys on the coach roof, and reattach the re-tied and 2.5 meters shorter broken line to the whisker pole, all while balancing on a pitching and rolling deck. Not an easy task for even a fitter younger man, but such is the nature of sailing that you have to make repairs when they're needed. No putting it off until daylight on this occasion.


One of the other rally boats had to retire from this leg and head to shore. Their steering wheel and steering cable were not working together and so they were limited to using their autohelm or emergency tiller. Not great conditions to have steering problems at all. We heard from them on this morning's radio net and the chain that moves the rudder has broken and will need replacing. They are safely in port near Barranquilla and getting help with the repair.


We awoke this morning to five or six dead flying fish on the deck! Paul has now returned them to the ocean depths for recycling. It is an overcast day with high grey clouds but it doesn't look or feel like rain. Fortunately the wind speed and sea state have both diminished during the course of the day and this evening, with less than 50 miles to go it is much more comfortable aboard than it was 24 hours ago. We will cross the finish line within a mile or two of 4 other boats and with the handicap system we should end up in a good position on the division A leader board. It's a reduced list this time seeing as three of the division left early but it will still be nice to maybe finish in the top 3!  We’ll see.


On his inspection tour of the boat this afternoon Paul noticed that one of the blocks at the bottom of the mast has broken, the one for the whisker pole downhaul. This must have happened when the jib sheet snapped last night, contributing to the bang we heard. Fortunately we have spare blocks on board.


We’ll cross the finish line in early hours of Sunday morning and will probably heave to pending daylight. The San Blas islands are notoriously badly charted and eyeball navigation is needed to reach an anchorage safely.


It's not been a particularly enjoyable trip with the sea state and high winds making it an uncomfortable sail. Let's hope the next leg is better.


We crossed the finish line at 1.35am this morning, shortly after three other, bigger boats and just ahead of a catamaran. The general advice was to not risk anchoring behind one of the reef-strewn islands in the dark but to heave to (back the sails) and drift with the current until daybreak, so that’s what we all did. This morning at first light we complete the final 8 miles and are now anchored in the East Holandes Cays, a stunning, pristine, unspoilt tropical island paradise complete with white sand beaches, turquoise seas and palm trees. Oh, we forgot to mention the twenty other World ARC boats here too!


The San Blas Islands while officially a part of Panama are almost a separate principality ruled by the Kuna Indians who call it Kuna Yala and are welcoming of visiting yachtsmen but do have some strong rules which we all need to abide by. The island chain comprises over three hundred small islets, many uninhabited but home to 55,000 indigenous people, living in primitive huts on the crowded inhabited islands, with no electricity and little comprehension of money.. Each island has a chief who rules his domain and the waters surrounding it, and their main trade is coconuts which they trade with the Colombians who visit by ramshackle boats. It is a different world to that we Westerners. What a privilege to visit such a place.


The local ladies make ‘molas’, to sell to the few tourists that pass through this special place. They take months to make and are effectively applique embroidery made from layers of cotton and fine stitiching. Very striking and we bought two from a visiting boat. 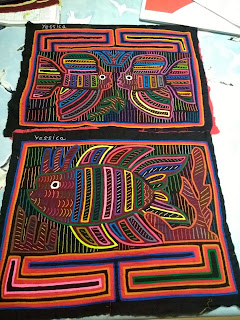 Two boats we know from the Ocean Cruising Club sailed into the anchorage to rendezvous with us and two other boats on the rally and we enjoyed a very happy couple of hours this evening catching up over drinks and snacks on the neighbouring small island, occupied by a few families. 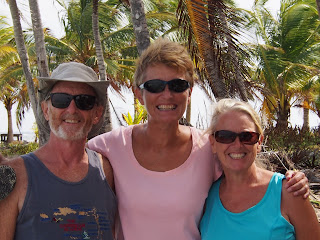 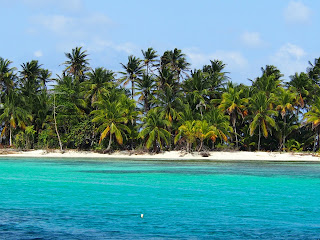 Not long after we arrived the chief came along to meet the ‘captains’ and welcome us to his island. The ladies, dressed in traditional clothing, then arrived with their mola work and beaded bracelets, and several of us bought some. Fortunately one of the rally boats speak Spanish and so communication with the local Indians was possible. Such a primitive life but they all seemed very cheerful. 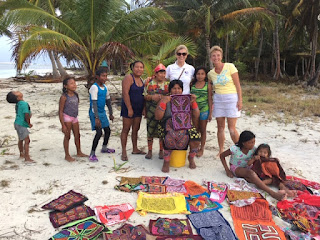 As dusk fell the chief returned and stood at a distance with his arms folded, but that was the sign for us to leave the island: they don't like visitors after sundown.


Given the delay in leaving Santa Marta we now only have four days in this magical place, such a shame but at least we have had the chance to visit even if for such a short time. The rally, the places we are visiting and the people on it are amazing. We're both feeling very lucky to be a part of it all.


We returned to the small island of the night before this morning to walk around in daylight, a matter of a 15 minute stroll. We checked with some local ladies and later the chief that we were okay to do so, not wanting to offend the Kunas. Several dwellings were located close to where we beached the dinghy, simple affairs with bamboo walls and roofs thatched with coconut palms. From what we could see inside, they comprised mud floors with minimal furniture, maybe a mattress and small table but little else. Very primitive and with no obvious sanitation or comfort. So far removed from our lives in the West that it is hard to believe. 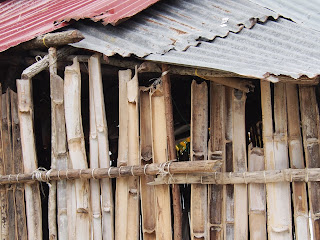 Men move in with women in Kuna society but seem to be the decision makers all the same. Every evening they hold a congresso, a meeting to discuss village matters with compulsory attendance. Miss one or two and villagers are put in isolation for up to 48 hours with no food! Our wander around, accompanied by a village dog, was an interesting and enlightening walk. Kuna life wouldn't be for us.


We moved on later in the morning to the western end of the Holandes Cays, a matter of around 5 miles sailing in calm waters alongside picture-postcard tropical islands, quite literally beach-fringed, palm-tree covered, uninhabited islets. Beautiful. The sailing was rather reminiscent of sailing on the Bahama Bank in the Bahamas several years ago, reading the colour of the water to help spot reefs and shallows. 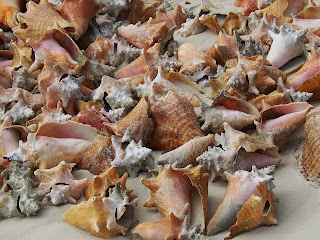 Anchoring an hour later between two islands, we headed ashore to walk around the larger of the two, discovering a Kuna settlement on the eastern end, a bit bigger than that of the morning and apparently with a village WC, a strange affair built on stilts out over the water!


That afternoon saw us snorkeling a fantastic reef, swimming from the boat. It reminded me of ‘Finding Nemo’: a shallow reef bordered by a fall away into the depths! Probably one of the best reefs we have snorkeled with myriad fish and corals. All in all a great day.


The race is on! Today is the day to clear in with Customs and Immigration in El Porvenir, another small island in the San Bias but this one with an airport and military outpost. So all but 6 of the rally fleet descended on the island seeking to gain official clearance into Panama. A slow old process involving sending information mainland for approval but 2 hours later we were good to go and headed north east to Chichime Day, yet another beautiful palm-fringed island with the clearest of seas. We spent the afternoon catching up with friends from the UK who are in the San Blas on a different rally. Talk about meeting up in exotic locations! 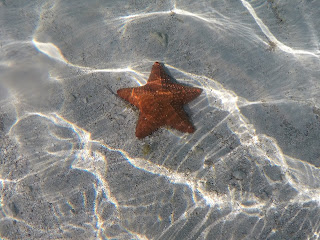 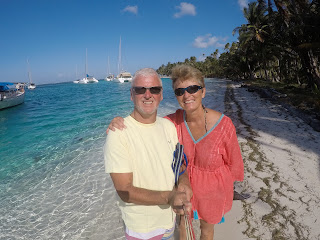 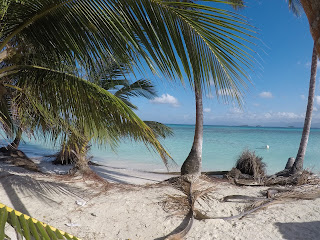 We offered a passage to one of the World Crusing Club ‘yellow shirt’ staff who needed a lift down to Colon so Swade joined us late afternoon and after a walk around the island and BBQ on board we retired early to catch some sleep before a 1am alarm call to head down to Colon.