It's lovely here, peaceful scenic and relaxed so we decided to stay a fourth night.  Today we're making the most of the swimming pool, cooling off from the high temperatures ... thank goodness for the breeze!

Our second day out and about saw us visit the Palm Gardens botanical gardens, a 2 acre site developed and landscaped by Lawrence, a very enthusiastic Grenadian, assisted by two other gardeners.  The colour and variety of flowers was breathtaking. 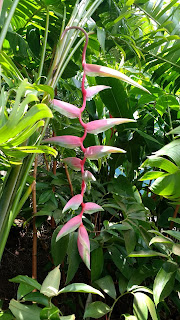 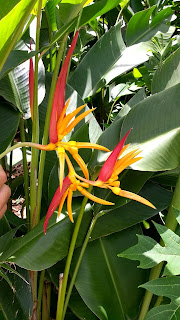 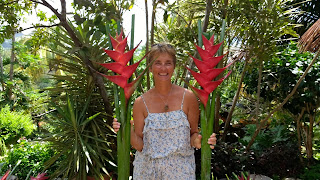 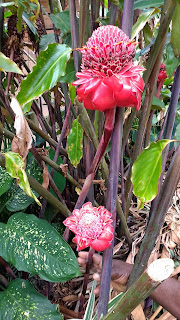 After a couple of hours tour we dropped down to the La Sagesse nature resort for lunch on the beach, a perfect semicircular bay.  So nice I forgot to take any photos!

Mum and Alan only have a couple of days left so tomorrow we'll sail back to Prickly Bay for another evening of steel band music a the yacht club.  That's after a live band and cocktails at the marina tonight too! 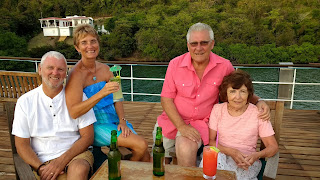 We moved around to this lovely little marina on Monday afternoon and it's just as nice as we remembered .... a small boutique hotel with pretty pool and restaurant and small marina.  And as since we've arrived we've been making the most of the facilities, enjoying cocktails and dinner ashore last night. 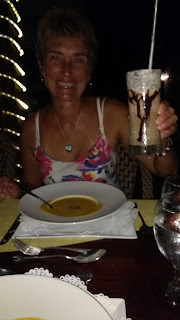 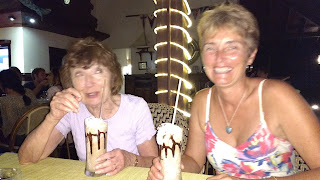 Today we hired a car to head up to the north of the island to visit the Belmont Plantation, where they grow cocoa, sugarcane, mangoes, nutmeg etc.  A really nice local chap, Kelly, toured us around explaining the process for producing cocoa beans, still largely done using the traditional processes.  The estate dates back to the late 1700s and is still a viable business, beautifully maintained and offering employment to a lot of local people. 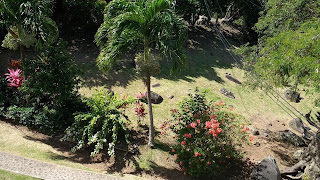 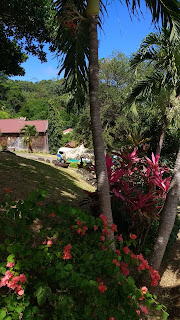 Part of the drying process involves leaving the beans out in the sunshine for 8 days, turning them every 30 minutes by shuffling your feet through them.  I had to have a go .... 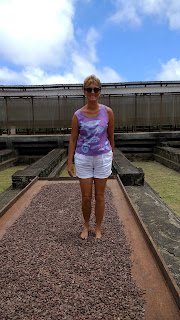 After lunch and a quick visit to the River Antoine rum distillery, the oldest working distillery in the Caribbean, we crossed island through the Grand Etang rainforest reserve which rises to 1910 feet via a very windy road.  The Grand Etang lake is the centre piece in the crater of the old volcano and is full of fish.  All very scenic. 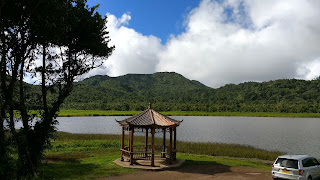 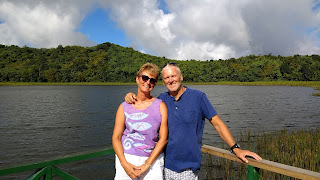 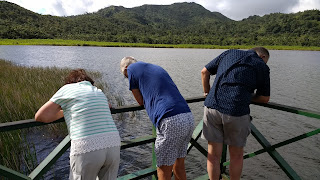 We climbed to the highest point on Grenada, 1910 feet, where the view down over  St George's was magnificent. 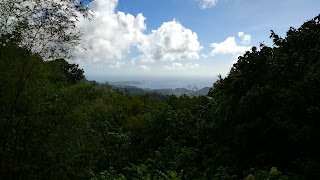 We've got the car for one more day so will continue our exploring tomorrow.

We had a successful sail around the south-west tip of Grenada to Prickly Bay yesterday after hoisting the newly repaired foresail.  The local company made a great job of it and it didn't cost anywhere near as much as we had expected.  We arrived in plenty of time for going to the yacht club for a pizza and beers, plus the delights of the New Dimension steel drum band, just as good as they were 6 years ago!  A fun evening. 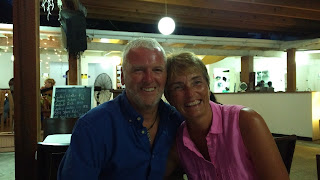 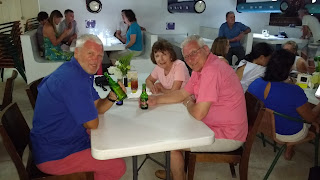 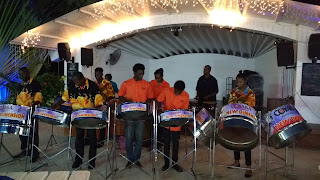 Today we have walked to what must be one of the few microbreweries in the Caribbean producing real ales, a big hit with Paul and Alan who enjoyed sampling several varieties. 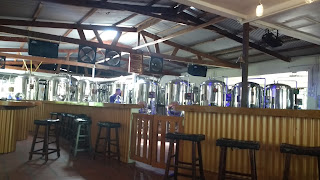 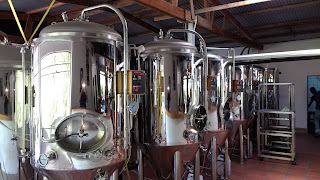 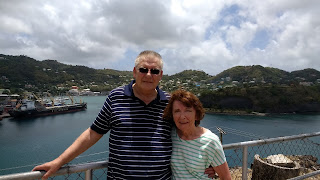 After over two and a half weeks at anchor in Jolly Harbour letting Paul's back get sorted, we sailed away from Antigua two days ago for the 80 mile passage to our favourite place in the Caribbean, Les Saintes just south of Guadeloupe.  The forecast was for winds of 18 to 20 knots and the reality was 38 to 43 knots so we had the sails well reefed down but even so it was a battle to keep Tumi on course as the big swell knocked us around.  Hey, ho .... we made it in 13 hours and anchored at Pain Du Sucre where there was a reasonable amount of shelter.

Yesterday we moved to a mooring ball off town, directly in front of the markers for the wreck, so after clearing in with customs and enjoying a French stick and the most amazing brie, we donned our masks and snorkels and went off to explore it and the neighbouring coral garden. 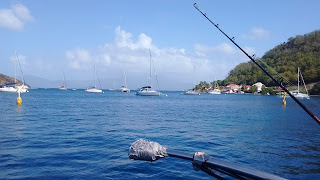 There were hundreds of fish and besides the usual shoals of sergeant major, angel, parrotfish and dorys, I saw my first pufferfish and moray eel.  Paul duck-dived to collect some urchin casings which were scattered on the seabed and will add to the collection of other shells we've collected.

We've got another couple of nights here before we need to head south for Grenada to meet our final set of guests, my Mum and her friend Alan.  We'll cover the 230 miles in one go in all probability, possibly breaking it in Carriacou if we feel the need for some sleep.  In the meantime we've booked to have lunch at two of our favourite restaurants out here today and tomorrow .... making the most of the French West Indies cuisine! 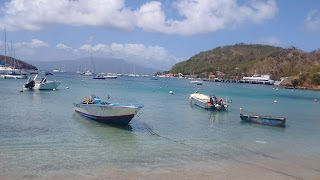 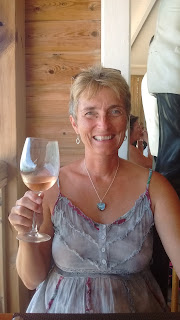 This has been a somewhat frustrating week in the main, not able to sail south to Les Saintes as we had hoped before my back injury, but things are improving albeit slowly. The crippling pain has gone to be replaced by a real ache, which I am suppressing with copious amounts of ibuprofen and alcohol (our friends Nigel and Karen arrived and anchored right next to us on Friday and we have been imbibing ever since).

I managed to rig up a back brace out of a sturdy leather belt and a boat cleaning pad which has enabled me to walk a reasonable distance again and yesterday I joined some friends to watch the rugby (come on England!) Live on TV. 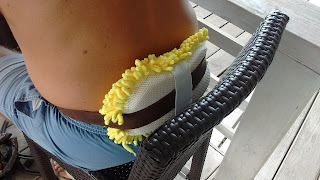 We had a bit of a disaster on Friday evening as we were going for drinks (note the pattern emerging) with the Ocean Cruising Club community when Debra caught her wrist getting out of the dinghy and plop! The boat keys went over the side and disappeared into the murky waters. We managed to find some bolt cutters and cut the padlock on the dinghy that would allow us to get back to the boat, and fortunately we had left Tumi unlocked so we could get back inside.

The OCC members are a very supportive bunch and we had two offers to dive for the keys in the morning as I am out of commission, so we returned to the scene yesterday to try. No good, the water was too murky and they couldn't be found. Another of the OCC members lent us a magnet and eventually I managed to pick up a combination lock, then our set of keys, phew! The lock we found has been used to replace ours, which should mean that we will never need to employ bolt cutters again to release the dinghy.

We are hoping that we will be able to head down towards Grenada this week, probably leaving on Wednesday which will give us enough time to be there in time for our next visitors with a leisurely passage of day sails and nighttime anchorages flying the quarantine flag to avoid clearing into the islands.

I promised to post the video of the killer whales filmed by a local fisherman off Antigua but due to some technical problems, the video will not play, so I have posted it on our Instagram page (boattumi) where you can see it. Enjoy! I don't think I would swim with these!

I injured my back 5 days ago getting out of a swivel chair in a car hire place and have been out of commission ever since. Copious amounts of ibuprofen have not done the trick and so yesterday I went to see a physiotherapist who quickly eliminated a slipped disc and trapped nerve, and whittled the problem down to a damaged ligament in the lower back. I was pulled about and manipulated, theN put onto a machine that pulsed shocks into the affected area to do something to the muscles there, then into a microwave to heat the area up, and sent back to the boat to swim and otherwise relax. I don't mind the swimming, but I find the relaxing bit hard.

As it turns out, the winds are picking up again this week so we would probably be staying in the bay anyway, so no big deal, and there are far worse places to have to stay for a while.

In conversation with a local shopowner this morning, there has been a sighting of a pod of killer whales very close by, I have seen the video that a local fisherman took and will try to post it to the blog, at one point, the orcas seem to be suspended vertically in the water by the boat just having a good look at the fishermen. It is very unusual for them to be in these waters, and a little scary too, maybe they are hoping to catch the migrating whales and their babies.

Anyway, I have to go and rest up again ....
Newer Posts Older Posts Home
Subscribe to: Posts (Atom)