On our way south from Freycenet, we were trying to keep ahead of the rain that had been forecast for the region, and even managed a half hour walk along the coastal path on the way. We were walking a trail with an aboriginal name that is very difficult to pronounce, but that had some very striking rock formations. 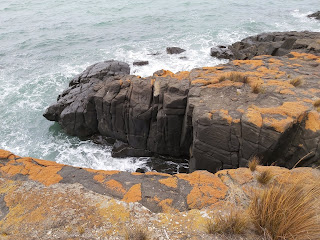 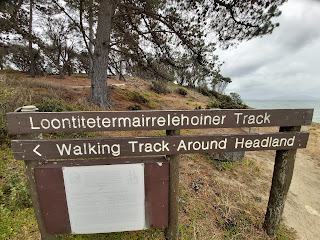 We arrived in Hobart yesterday afternoon on something of a murky day, with overcast skies. Undaunted, we took ourselves up to the top of Mount Wellington to see if there was a view to be had. Sadly not, we were well into the cloud canopy before we reached the top and there was no view to be had. However, we did manage to get one as we dropped back below the lowest cloud, and Hobart was there in all its glory. 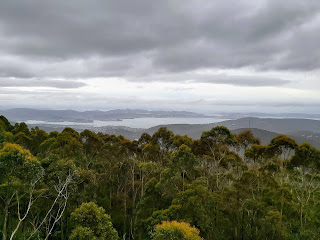 Last night our friends JF and MJ came to visit us for drinks and nibbles in their heavily decorated campervan. As is usual on occasions such as these, we chatted through a few bottles of wine, ate too many nibbles, and were too full to contemplate dining out. However, we went to Hobart waterfront and sampled the nightlife, and then, much later than we anticipated, made our way back to our accommodation. It was easiest for our guests to simply stay put on the driveway in their psychedelic wagon, and so they did.

This morning, after we finally surfaced somewhat jaded from the late night, we went back to the waterfront for a reviving breakfast, and had a couple of photos taken. 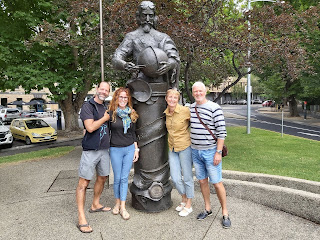 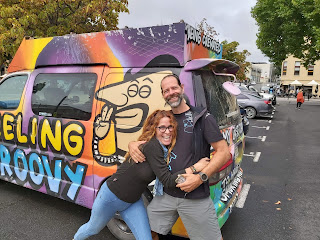 This will be our final posting on www.afloatonaboat.com - as we have mentioned before, we have set up a new blog and we will be posting all future updates on this one. It is www.offonourtravels.com and we hope you will continue to follow our progress as we explore the planet.
No comments:

Today has been a great day. To kick off, we woke up to this view after a night of being lulled to sleep by the sound of the waves crashing onto the rocks ... not bad! 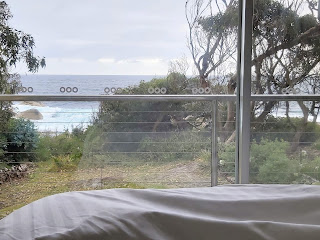 Our plan for today was hiking in the Freycenit national park, about a 30 minute drive south of our base in Bicheno. After a leisurely breakfast we headed off, making a quick stop at the Bicheno blowhole which was certainly blowing today as the swell rolled into towards the shore. Spectacular! 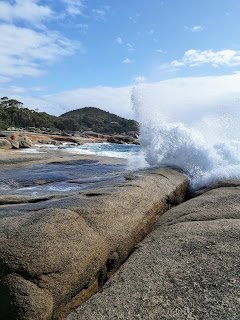 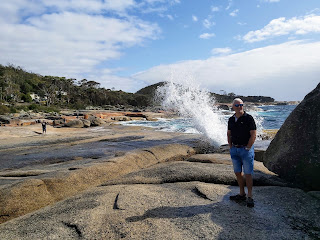 The Freycinet national park is probably one of the most popular in Tasmania, and justifiably so. The view over Wineglass Bay attracts most visitors but not many then continue down the 1000 steps to the beach itself, cross the isthmus to the beach on the other side of the headland and then follows a woodland coastal track back to carpark. We did! A total of 14 kilometres of lovely views, white sand beaches and turquoise seas. We could have been in the Bahamas!! 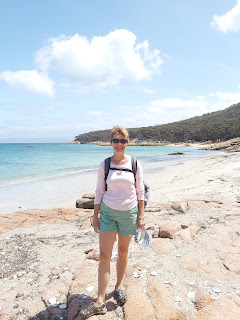 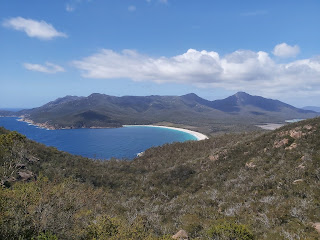 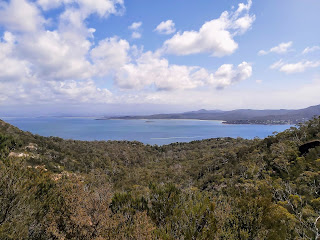 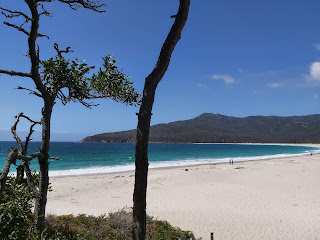 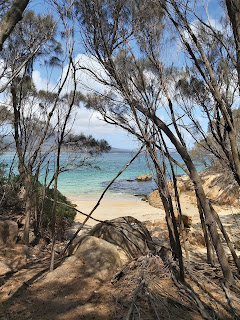 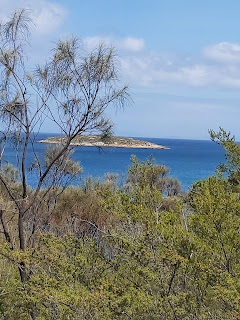 Tasmania has abundant wildlife, not that visitors get to see that much as most of it is nocturnal! Sadly that also leads to a lot of roadkill: creatures dazzled by headlights are regularly knocked down, despite the numerous signs reminding drivers to drive more slowly between dusk and dawn. On our travels around Tasmania we rarely travel more than a couple of miles in forested or rural areas without bearing witness to this. Very sad. Everything from wallabies, to padermelons, wombats to possums, and more besides. Fortunately, because there are so many critters about, we are still able to find some live ones, including an echydna, a strange looking creature that appears to be a cross between a hedgehog and a porcupine. Actually, it's not related to either, its closest relative is the duck-billed platypus, as you can see from its beak. 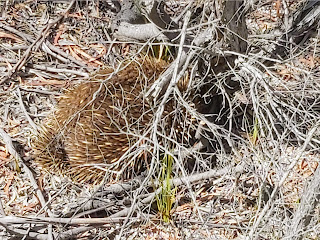 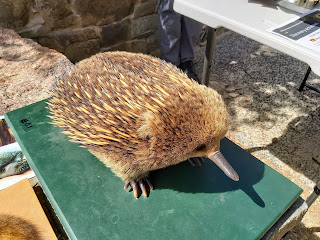 Tomorrow we will head for Hobart for our last couple of nights in Tasmania before flying to New Zealand on Wednesday. The forecast isn't too good ... up to 60cm of rain in 48 hours ... but we're meeting up with a couple of sailing friends for dinner on Monday night, and an old school friend on Tuesday evening.
No comments: 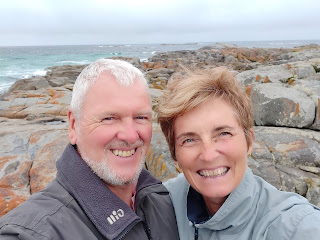 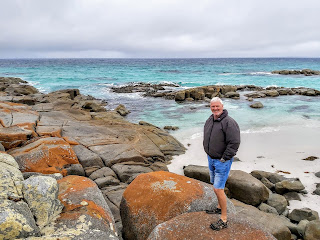 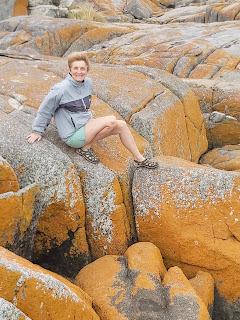 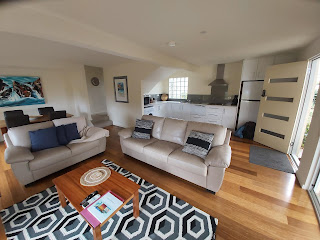 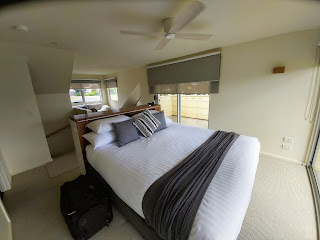 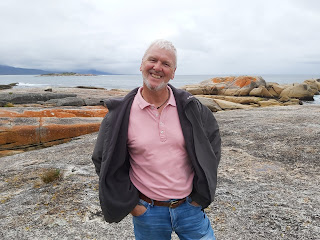 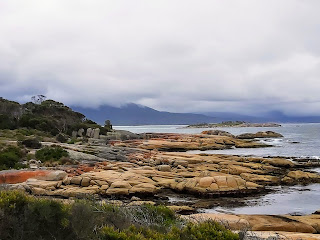 Unfortunately for us the rain arrived again before we reached the blowhole and so we retreated to our luxury pad for a glass of wine and movie!
No comments:

Having sold Tumi it doesn't seem appropriate to continue our travel blog on www.afloatonaboat.com and so we have registered a new domain www.offonourtravels.com which we will switch to in the near future. We will provide a changeover date as soon as we are ready to make the switch. You have been warned!!
No comments:

We seemed to spend all of yesterday in the car tracking across the north of the island from Stanley in the west to Longford, near Launceston in the east. The reality was actually only four hours but we were both tired by the time we arrived at our accommodation for the next two nights. When planning our trip, neither of us had really realised just how big Tasmania is, nor how windy the roads! Throw in our underpowered hire car and the numerous hills, then we don't make very quick progress!!

An early start yesterday saw us climbing 'The Nut', an iconic volcanic plug linked to the north coast at Stanley. It was a steep ascent, climbing 150 metres in only 450 metres distance, so one in three, but we made it and were proud of ourselves for not taking the easier chairlift option! A 2 kilometre walk circles the summit with views along the coastline and out into Bass Straits, the stretch of water separating Tasmania from Australia. Yesterday, under leaden skies, the sea didn't look very appealing and was quite rough but the view wasn't bad at all! 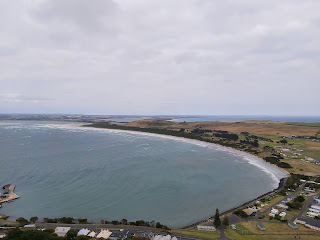 We took the scenic route across the island enjoying the vistas of rural Tasmanian life. Stopping at Evandale, a town that is noted as an historic place in its entirety, we strolled the quaint streets for a short break before continuing to our lovely accommodation in Longford. And what a fabulous place to arrive at, a small studio apartment with views over farmland and with use of the swimming pool. Our photos just don't do it justice .... we really have been very lucky with our accommodation so far. 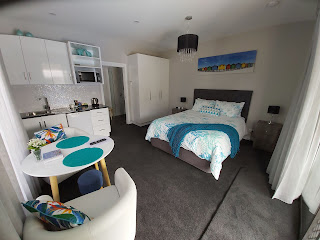 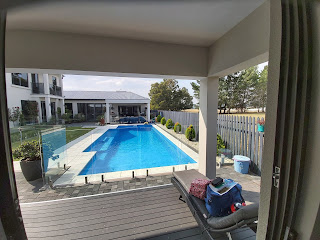 After an excellent night's sleep we headed to The Woolmers Estate this morning, Australia's oldest sheep station which is now an UNESCO World Heritage site. Established in 1817 by Thomas Archer I, an immigrant to Australia from Hertfordshire in 1813, he was granted 300 acres of land and assigned convicts to help him manage it under a governmental initiative called the Assignment System. This system assigned transported convicts to free settlers who were then responsible for adequately feeding, clothing and housing them in return for labour.

Through hard work and purchase of neighbouring property,  the Woolmers Estate totalled nearly 5000 hectares by the time Thomas Archer I died in 1950. His heir, Thomas Archer II, predeceased him leaving the estate managed by a family trust until his grandson was of age in 1865. TAIII showed little interest in the estate and his gambling habits saw him in almost continual financial trouble from 1870 to his death in 1890. His successor, TAIV, also had little interest in the estate being a prominent early golfer, motorist and keen sailor. His love of golf passed on to his only son TAV who competed in the Australian Open. He also only had one son who never married and bequeathed Woolmers to a charitable foundation on his death. The house and its contents look very much as they did on the death of TAI back in 1850 with all the original furniture and family possessions still in place.

In its heyday the estate employed 65 convict labourers to tend the sheep, harvest the wheat and apples. 1 in 10 of these were women and they lived in the attics of the family home while the men lived in barracks on the riverbank. By all accounts the Archers were good and fair masters and many assigned convicts remained on the estate as free men when their sentences had been worked. The wooden sheep shearing shed and apple barn are the oldest wooden barns in Australia, having survived given Tasmania doesn't have termites! 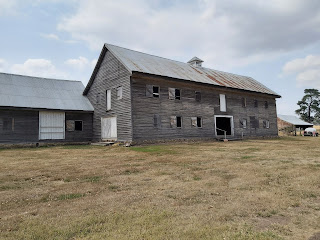 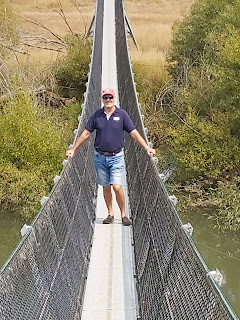 The convict trail, crossing the Macquarie River, links Woolmers to the neighbouring Brickendon Estate, another historically significant convict site operated by TAI's brother. The assigned convicts were shared between the brothers, travelling the trail on a daily basis as needed. We walked a short distance along it but in 83 degrees and with no shade it was very hot.

Instead, after a late lunch we retreated to our accommodation for a lazy afternoon and swim in the pool. Just what the doctor ordered!
No comments:
Older Posts Home
Subscribe to: Posts (Atom)