We awoke after a great night's sleep to a cloudless sky as we looked over the garden of agapanthus in front of our cottage down towards Little Norfolk Bay. We'd had a 3 hour wilderness cruise along the spectacular coastline of the Tasman Peninsula, exploring the coast between Eaglehurst Neck and Port Arthur, so we duly signed up, donned our floor length spray coat and newly purchased headbands made from Tassie merino wool, and climbed aboard our vessel, effectively a 12m long rib equipped with three 250hp outboard engines. 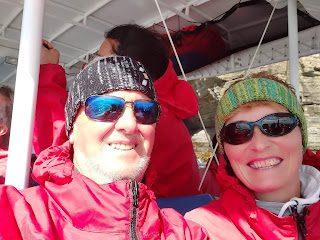 And off we went, first stop the Tasman Arch we had admired from land yesterday, this time seen from a very different perspective. A rock ledge surrounds the entrance and as swells wash over it, the water cascades off like a mini-waterfall. 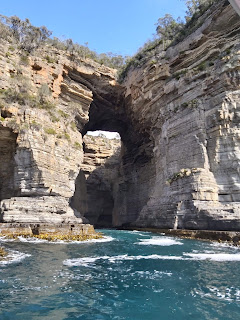 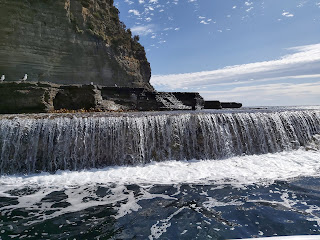 Continuing along the coast we admired the towering cliffs, composed of siltstone in a series of layers. These layers aren't actually horizontal, sloping instead towards the sea which creates the image on entering caves that the water is flow flowing uphill. Very strange. 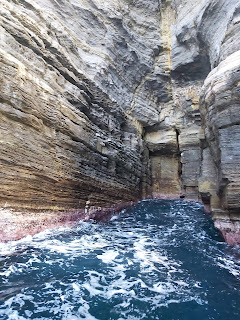 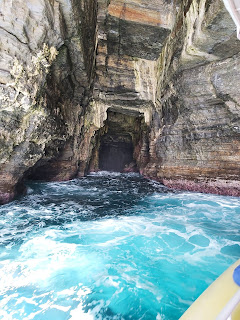 As we continued down the coastline with a pod of dolphins frolicking either side of us, we admired the graceful flight of several albatross. These birds with wingspans of up to 3 metres soar on thermal currents, barely flapping their wings. They spend months at sea, pairing for life yet only meeting every year and a half to mate. We spotted Shy and Buller albatross, circling the skies in search of food. Apparently they can smell food from 30 miles away! 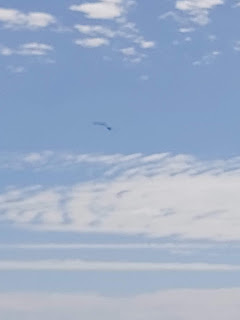 Our next stop was at Cape Hauy where two dolorite rock formations, the Candlestick and Totem Pole, shoot over 100 metres up from the sea. Notoriously difficult to climb (apparently it takes experts over 6 hours .... we didn't try!) these rock formations have been carved by the elements. Originally covered by layers of siltstone, this has all been eroded away leaving only the hard granite-like cores remaining. 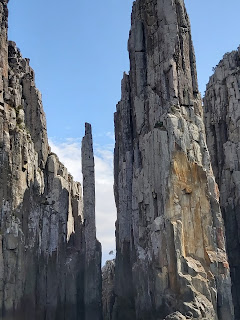 Not far south of here we came to Cape Pillar and Tasman Island, the tip of the Tasman Peninsula and home to colonies of Australian fur seals and sea birds. By now a bank of ominous looking cloud was forming out over the Southern Ocean, and the already cool conditions at sea dipped dramatically.  We admired the (very smelly) fur seals, remarkably similar to the sea lions we saw in their hundreds in the Galapagos other than the fur seals here have two layers fur with air in between for better insulation. They stank and watched us with interest from their rock perches. Interestingly the males 'hang out' together much of the time, often basking for up to a week before feeds. 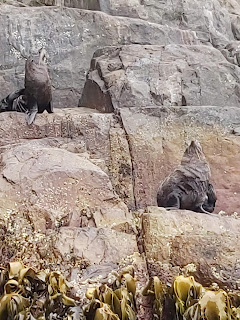 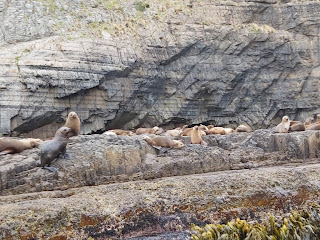 And then the heavens opened as we turned around to head back north to Pirates Bay, our start point. The skipper opened up the throttle and we shot back at over 30 knots, lashed by rain and spray as we bounced over the swell. We got drenched .... but fortunately the full length spray gear we'd been provided for kept our clothes dry, but boy was it chilly and we rather gratefully disembarked. Sitting in the sun-warmed car was heaven!

Typically by now the squall had passed over and the sun was shining once again so we continued to Port Arthur. Founded in 1830 by the British as a penal station using convict labour to produce sawn logs for government projects. Three years later it became a punishment station for repeat offenders from all British colonies, built on a philosophy of 'discipline and punishment, religious and moral instruction, classification and separation, training and education'. Many men were broken by the harsh system but others left rehabilitated, educated and skilled. Offending boys were housed on an island in the bay, called Puer Point, the first juvenile incarceration centre, the forerunner of the Borstal system. 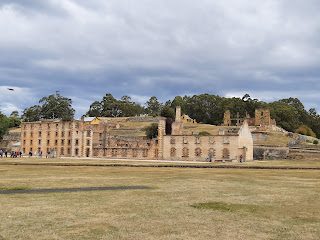 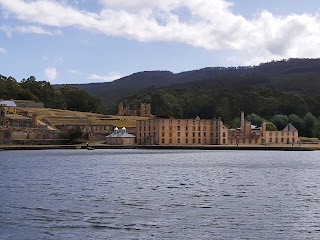 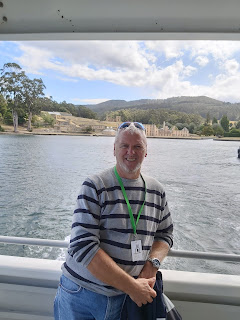 Port Arthur's community of military and civilian people lived their lives in stark contrast to the convict population. The then Commondant of the station authorised the building of a village, complete with church, post office, gardens and even an oak and willow tree! Civilian staff enjoyed parties, regatta and literary evenings in their lovely homes set in beautiful grounds. 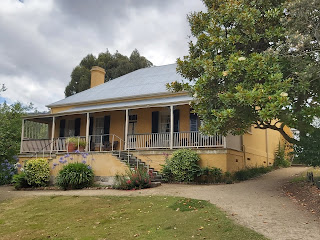 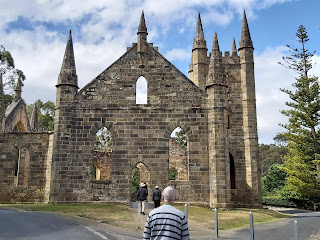 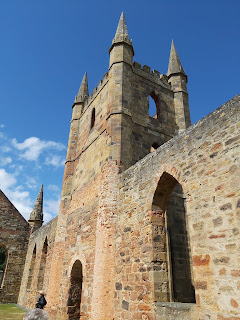 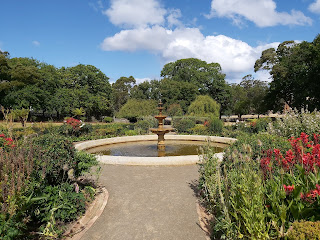 By 1840 more than 2000 convicts, soldiers and staff were living at Port Arthur and it became a major industrial settlement producing a range of goods for export to mainland Australia and the rest of the world but with convict transportation ceasing in 1853, it became an institution for aging and ill, both physically and mentally, convicts. It finally closed in 1877 and many of the buildings were sold and a small town called Carnarvon was founded.

Since then the historic merit of the site was recognised and a major conservation project, rebuying and restoring the buildings, in the 1980s. It is now on the World Heritage List.

A fabulous but tiring day exploring this remote corner of Tasmania .... 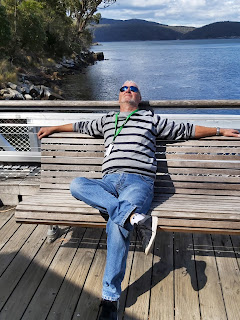