We probably should have explained before where Tasmania got its name. The first reported sighting was by a Dutch sailor named Abel Tasman in 1647 and he named the island after his sponsor, Anthony van Diemen's Land. When the British colonised it in the early 19th century they abbreviated it to Van Diemen's Land and thus it remained until 1856 when it was renamed Tasmania in honour of its first European discoverer.  History lesson over! But not the geology or nature ones!!

After all the driving of yesterday we wanted a low-key day today exploring around Mole Creek. It sits in the shadow of the Great Western Tiers, a collection of mountain bluffs forming the northern edge of the central highlands region we drove across yesterday. The scenery is breathtaking, especially under vivid blue skies as we woke up to. 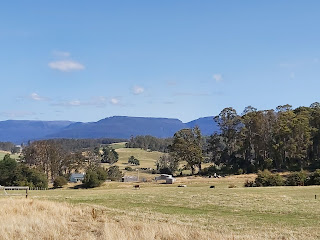 First off was a visit to Mole Creek Caves, part of the national park, in particular Marakoopa cave where glow-worms line the ceiling, something we haven't seen before. The caves were formed over 400 million years ago but only discovered by two teenage boys in 1906 who then kept their discovery a secret for 4 years, exploring at their leisure! There are around 300 caves in the vicinity but Marakoopa is one of the biggest and besides the glow-worms has an impressive collection of stalagmites,  stalactites, columns, curtains and straws! 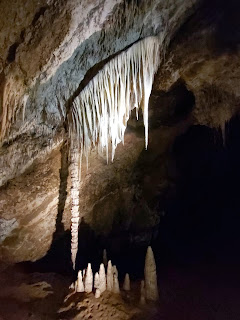 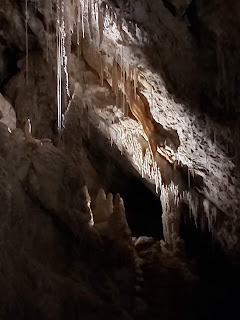 We wandered about 350m into the cave system, ascending 62m to reach the aptly named 'Great Cathedral' a large cavern with amazing acoustics.  Nearer the entrance a creek runs through the cave and it is above this running water that the ceiling of glow-worms reside, looking like a constellation of stars. Beautiful. We weren't allowed to take photos as the flashes upset the glow-worms (actually larvae of a mosquito-like insect) and they stop glowing. As it is the glowing that attracts their prey, they then die. So no photos to post, just our memories of such a special sight. One last thing: the brighter they glow, the hungrier they are!! On the way out of the cave, we (Paul) stopped to look at one of the cave's resident spiders. A strange looking arachnid in that its lungs are on the outside of its body. Also it had very long spindly legs, which if you spread them out flat will make the spider as large as a dinner plate! As these were in the vicinity of the glow-worms, we couldn't get a photo of that either.

After lunch we decided to stretch our legs, hiking to Westmoreland Falls through the forest at the base of the Great Western Tiers. It was a pleasant walk but the falls themselves needed a better water flow to be seen at their best. Still, it was good to get some exercise! 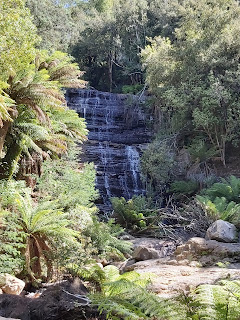 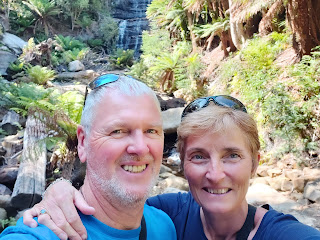 We also were interested to visit the Alum Cliffs and Gorge, a short walk through open woodlands to a viewpoint. And, wow, what a view! Perched high above the Mersey River the outlook was incredible. 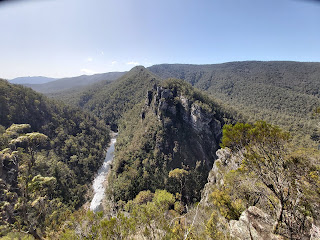 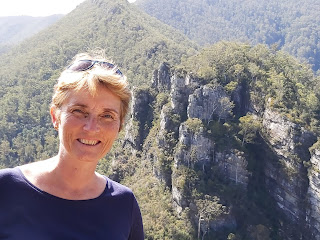 The area had/has a great deal of significance for the native aboriginal people who called it Tulampanga. It was the meeting point of three aboriginal nations and was a sacred celebration place. The women harvested red ochre from the cliffs, mixed the powdered ochre with oil, and painted their faces and bodies before dancing through the night. It certainly was spectacular.

The whole Mole Creek area is gorgeous, as is our accommodation. If anyone is thinking of visiting Tasmania, have a look at www.molecreekhideaway.com.au and think about staying. The view from the property alone is worth it! 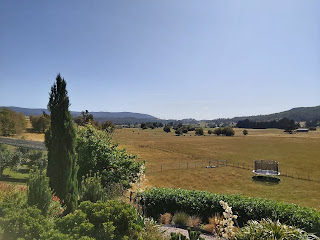 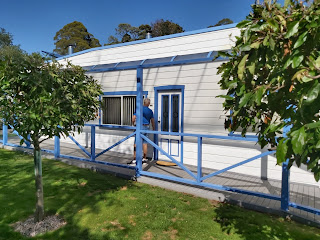 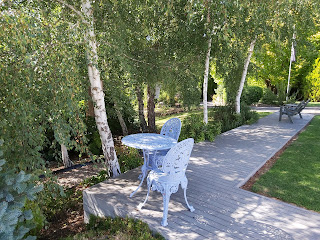