We stayed on board last night in the same bay as the previous night, had drinks on board Chanto, then retired to Tumi to watch a movie, the Greatest Showman. Unfortunately the sound system decided not to talk to the tv, and consequently movie wasn't presented at its best, so this morning we sorted out the comms pink and replayed some of the music through the Bose speakers. Such a difference! We need to watch it all again sometime soon.

Today we are motorsailing north to join the rest of the fleet, possibly stopping off at Isla Mogo Mogo if there is a space to anchor outside the current in one of the two bays. If not, we will continue on to Isla Contadora and drop the hook there. The winds are right on the nose, so unless we want to zigzag our way slowly (next to no winds here today) we have got the engine running, and used the power to top up the water tanks on the way.


It was party time aboard Tumi last night with nine of us in the cockpit enjoying cocktails and wine, accompanied by nachos. A good time was had by all.


This morning we ventured out on two dinghies to the bigger island across the bay and to the small, locals’ village. Much of the waters are uncharted and so even in the dinghy we have to take it slowly, eyeballing our route which is hard in these murky waters, unlike in the Bahamas where the clear turquoise waters make it easy to spot rocks and coral heads.

Landing ashore we checked with a couple of fishermen that we were welcome and then wandered through the village. It was interesting to see that unlike the Kuna Yala Indians in the San Blas islands, these people had electricity, some street lighting powered by solar panels, and block built houses. There didn’t appear to be a lot of activity and we struggled with the language barrier but they were friendly enough and we bought a few rudimentary provisions in the tiny shop but sadly no pearls. We did notice the filleted iguanas drying in the sun ... didn't buy one of those! 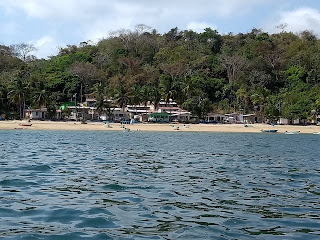 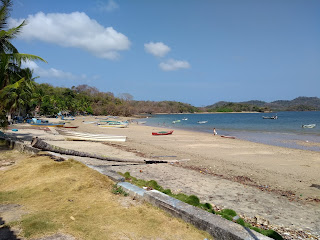 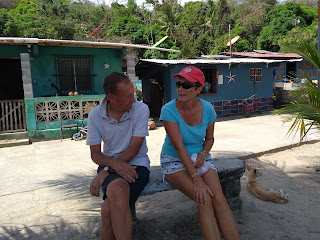 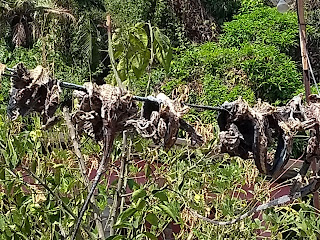 We’re having a lazy afternoon and are joining the crew of Chanto on board for drinks later.


Paul dived down on the propeller this morning and finally managed to get the trapped rope free after a lot of sawing away at it with a serrated bread knife. The scuba tank was almost out of air when he finished but what a relief: To be stuck over 60 miles away from the nearest boatyard without a functioning engine would have been very tricky. So, a new day, and another lesson learned. 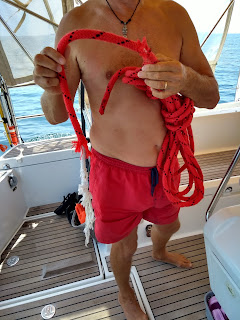 We’re heading for the east coast of Isla Del Rey to a small anchorage just below a smaller off-shore islet.  Apparently the locals sell pearls on this island so we're hoping to be able to look at a few, maybe even buy one or two!


Interestingly the wind temperature this side of the Panama Canal is quite a bit cooler than on the Caribbean side and even Paul has resorted to wearing clothes! The sun is still hot and the sky blue but sailing along feels a little chilly. Our other observation is the colour of the Pacific … muddy green, and when Paul and Dan were trying to cut the line free they got quite cold as the water temperature is considerably lower. The visibility wasn’t that great either. Hopefully all will improve as we head further west! Muddy brown, cool and cloudy seas are not very tempting for a swim! Oh, and I forgot. It smells a bit like cabbage too!


As we arrived at the anchorage we forgot to bring in the fishing line and it twisted itself into all sorts of knots.  It took us several minutes of team Tumi effort and a lot of patience to unravel it, but we finally managed it without having to cut the line. Another lesson learned, never to be repeated!


We left Contadora this morning with a view to anchoring in a sheltered bay to the east of Isla Cassaya, somewhere which looked perfectly feasible in the cruising guide. However when we were approaching the island we realised that the electronic charts had no detail on them whatsoever and, coupled with the fact we were arriving at low water, we felt very vulnerable so we decided to abort and head for a different anchorage at Isla Jose, some 15 miles south. Having cleared the myriad reefs we set a course due south and decided to fly the Parasailor. Having failed to get it up the last time on our trip from St Lucia to Santa Marta, we were understandably apprehensive about whether this time would work. Paul and Dan worked on the bow and Jackie and I were working the lines in the cockpit. Good news, we got it up, only to discover it was back to front! So down it came, the lines were connected the other way around and it was up again. Fantastic! We flew along at over 8 knots until we approached the anchorage. And then disaster struck. As we took the sail down, one of the controlling lines fell overboard and got wrapped around the propeller. The engine stalled and we realised what had happened.


We had no choice but to continue into the anchorage under sail, where assisted by fellow World ARC-ers we managed to anchor safely. Paul and Dan donned masks and jumped overboard to try to unwrap the line from around the prop. They got 95% of it off, but the final 5% was well and truly jammed and despite their sterling efforts it refused to budge. With the light fading they called it a day and Paul will go down in the morning with his scuba gear on. What a shame to end a day like this.