We finally escaped Papeete yesterday after the dinghy was returned and the winds died down and Paul's ear had settled down somewhat. After refuelling just south of the airport (we had to radio to request permission to cross both ends of the runway so a low-flying aircraft didn't dismast us!) we ventured outside the reef for the short trip across to Moorea. After a week of very high winds we were expecting a residual swell and still reasonably windy conditions but it was as benign as can be and we ended up motorsailing. Typical!


We anchored last night in Cook's Bay, named after Captain James Cook we first arrived here in 1769. The reality is Cook actually anchored in neighbouring Opunohu Bay where we have moved to today. Finally free of the marina we sat out under the stars last night and had a bbq and put the world to rights. 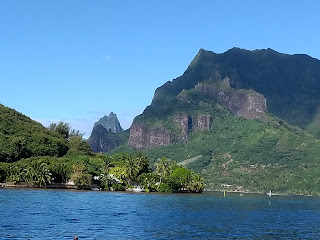 This morning after snorkelling over the reef at the entrance to Cook's Bay we moved around to Opunohu Bay, a beautiful bay on the north coast of Mo'orea with the most spectacular backdrop of Mount Tautuapae, another excellent French Polynesian word with far too many vowels to twist your tongue around! 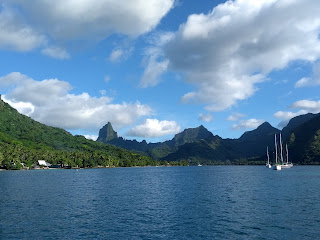 More snorkelling this afternoon revealed an enormous spotted eagle ray which must have easily been over two metres across with a similar length tail. And then shortly after getting back on board a very large turtle surfaced alongside Tumi. Another treat. Life doesn't get much better than this! 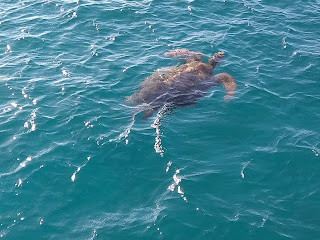