We've just had the most amazing day in this stunning island. We booked an 4WD ATV off-road tour this morning and duly turned up at 8.45am to be greeted by Jay, our Belgian guide. After a cursory lesson we were on our way, Hannah driving her and Jon and Paul us. Within no time we had turned off the made road onto a rutted trail and we're crashing through a riverbed amidst pineapple fields with the jagged mountains forming the most startling backdrop. 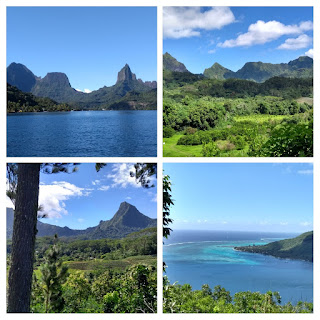 Mo'orea means yellow lizard in Polynesian and Jay explained how the island became to be known by that name: hundreds of years ago a couple living on a neighbouring island had a baby, not a human one but an egg which, when it hatched, revealed a yellow lizard. The father accepted the lizard as his son and raised him as such, keeping him in a cave, until such time as his wife became scared of him. At that point the man and his wife fled to here but their 'son' searched for them and died innthe process, being washed ashore on this island. The local priest was so impressed by his dedication in finding his parents that he named the island after him in Polynesian .. Mo'orea.

Our first stop was Mount Belvedere, the end of the road in the Opuhoha Valley, with amazing views over Cook's Bay and Opuhoha Bay, separated by Stonefish Mountain. 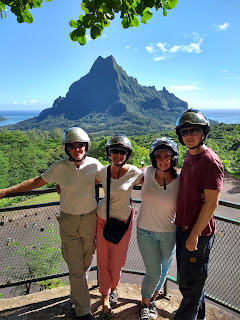 Our trip back down took us off-road on Rue Des Ananas, aptly named given the number of pineapples being grown. 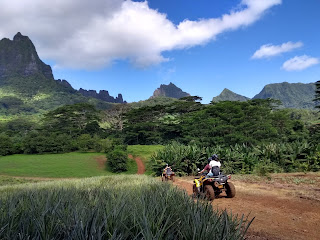 Our ATVs were surprisingly comfortable given the rugged terrain we were crossing. After one particularly rutted and muddy corner we got sprayed head to foot in mud as soon as we sped up again. 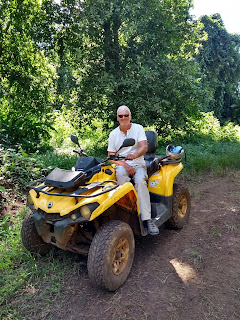 Our final stop was Magic Mountain with the most remarkable views of the lagoon surrounding Mo'orea. Jay explained how the island and it's reef formed: plate tectonics caused the upswelling of the earth into jagged mountains fringed by rocky shores. Over the millenia, as the mountains eroded the rocky shores became home to microorganisms and a reef was born. As the central mountains continued to sink the distance between the reef and the land grew until a reef formed offshore. The passes through the reef into the lagoon behind (where we enter and leave) were formed where rivers flow into the sea with the outflowing fresh water carving a channel in the newly forming reef.

Today, the older islands have small, if any mountains, remaining such as the Tuamotos where the outlying reef has grown to an extent that small islands (Motu) have formed whereas the younger islands have the highest mountains and no reef, such as the Marquesas. The Society Islands are midway age-wise.