Some 30 hours and 200 nautical miles after lifting the anchor we very gratefully moored up in the marina in Papeete having survived a rough and challenging sail. We've probably become a bit complacent about having benign weather conditions and the Pacific reminded us of the might of the oceans. But nothing broken (on us or Tumi), no seasickness and just a bruise or two from lurching around the boat in the 3 to 4 metre swell and 30 knot winds!

Jon and Hannah joined us on board and we enjoyed a fun reunion as the rain lashed down! Not exactly a warm welcome to Tahiti!!


Our dinner ashore at Toau was a fun affair with delicious tuna cerviche, grilled reef fish, breadfruit fritters, rice and, of course, the pig! The owner Valentine was a larger than life category and rather took to Paul. Her husband, Gaston, by comparison was rather diminutive but they both made us all very welcome and fed us superbly. 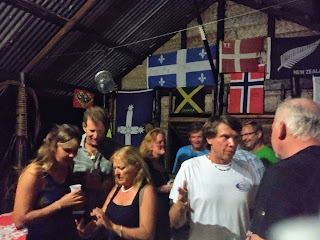 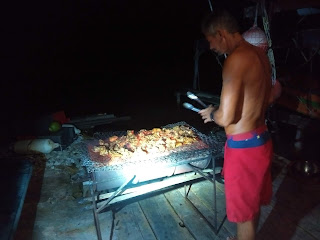 Anse Aymot used to be a village complete with church and, rather incongruously, a France Telecom phone box! Today only three people live there eeking out a living from tourism and no longer pearl farming since the collapse of pearl prices in the early 21st century. Even Valentine said she is moving to neighbouring Fakarava to join her family making for another uninhabited atoll. A shame but it is a hard and lonely life for them so quite understandable. We toured the remains of the village the following morning and visited the small church, little more than a shed and with no charis as Valentine had borrowed them all the previous evening to seat us for dinner! 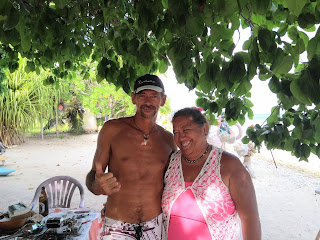 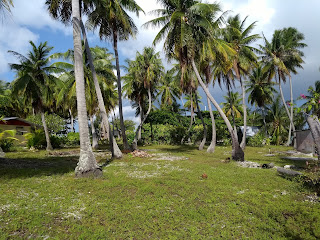 We found out from one of the other boats that there is a significant weather system moving north which will engulf all of French Polynesia by the end of the month. As we have learnt over the years, the art of safe and comfortable sailing is all about going when the weather permits so we hastily revised our onward plans and decided to leave Toau that afternoon for an overnight sail to Rangiroa. Six other boats joined us and mid-morning yesterday we entered the Tiputa pass into the biggest coral atoll in the world, or at least one of the largest.


Rangiroa has around 2,000 inhabitants making it a real metropolis by Tuamotan standards! Given the incoming weather we had decided to only stay one night on the atoll so determine to make the most of it despite a lack of sleep overnight. So we kicked off snorkelling the amazing coral garden on Motu Niku Niku at the lagoon end of the Tiputa pass. It was another wow, this time more for the size and beauty of the myriad coral rayejr than the fish (but here were plenty of those to see too!). Every shape, size and colour of coral spread out in front of us, absolutely stunning. Sadly we forgot to take the GoPro so no photos. Swimming amongst it was a 2 metre Moray Eel, a nasty looking critter which we gave a wide berth to, but only one black tip shark which was a decent size too.


After a quick shower and change we ventured ashore for lunch and asked a local for his recommendation. Chez Lili, owned by a Madagascan lady and boy what a treat it was. I had the tuna carpaccio, delicately spiced and served with a mango dressing, while.Paul opted for the entrecote. Both were delicious. Returning to the boat we grabbed an hour's sleep before heading ashore to the one 'posh’ resoet for sundowners with some of the other boats. Expensive but very stylish and you have to push the boat out occasionally! 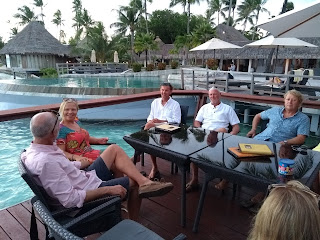 So this morning we pulled up the anchor at 6am to set sail for Tahiti and arrive before the bad weather system does. It's a beautiful sailing day and we're bombing along at over 7 knots so should make it in good time, albeit over half a day late for Jon and Hannah who arrive on the island at 9pm tonight! The weather system has caused a last minute change for them as well as they are no longer flying out to join us in Rangiroa … the sail down to Tahiti a few days later wouldn't have been pleasant. Instead we get to spend longer in the Society Islands (Tahiti, Moorea, Huahine, Taha and not forgetting Bora Bora) … hardly a hardship!


As it turns out we were right to fear a lack of fresh supplies! Not a tomato/cucumber/lettuce/banana/grapefruit/mango or eggs to be had … but plenty of freshly baked baguettes so all was not lost! Rotoava is a pretty little village along the edge of the lagoon and it was nice to stretch our legs along the waterfront exploring the place.


As everyone tends to know, French Polynesia is famous for black pearls and there are several pearl farms in the Fakarava lagoon. We went along to one farm yesterday to learn how they farm the pearls: basically they insert a smooth Mississippi stones into the oyster and then put the oysters themselves into vertical wire racks. Harvesting is undertaken once a year in January/February when the pearl is removed. It takes two years for the pearl to grow to a reasonable size and only 2% of the oysters yield a perfect pearl. In the others it is a mix of colour/size/shape, and indeed the farm let all of our group choose an oyster and they removed the pearls for us. It was effectively a pearl lottery and Paul lucked out with a large, spherical pearl with very few imperfections. I wasn't so lucky!


The tour ended (not surprisingly!) in their shop where they had some fabulous pearl jewellery for sale, including some unmounted pearls of various sizes. It turns out Paul's pearl was worth about $500 … not bad for a $40 entry fee! We'll bring it back to the UK to have it put in a setting to match the pearl earrings I bought … it would have been rude not to!


This morning we were up early to head to the general store to pick up a grocery order for the restaurant we're dining in tonight! It was the only way the restaurant could accommodate us so a deal was done and we motorsailed 30 miles to neighbouring Toau in a convoy of five boats. We're all dining ashore and the restaurant owner has killed a pig in our honour! We're looking forward to it!


The anchorage is in a spectacular cul-de-sac entrance to the lagoon and we are right at the front with uninterrupted views. Whenever we get a decent internet connection to be able to upload photos it will be clear just how beautiful it is. We had a quick snorkel over the neighbouring reef and spotted spotted eagle rays, enormous Napoleon fish and many other varieties too. It was getting a bit late in the day, approaching the time when the predators come out, so we kept it brief and will snorkel more tomorrow! 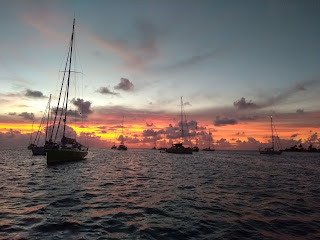 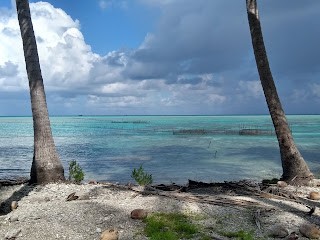