It's been an exciting morning. The first fleet departure for Tonga (via Suwarrow and Niue) left at midday today and Tumi was chosen as the committee boat, hosting the rally organisers (called yellow shirts for obvious reasons). We collected them at 11am to be in position as one end of the start line for 11.30am. Then it was a matter of keeping Tumi in place for 30 minutes as the race countdown began. Stefano the event manager, assisted by Swade, issued timechecks and sounded the horn at 10 minutes and 5 minutes to start. Paul was asked to hoist the appropriate flags to signal the timechecks. All very technical and then at midday the first boat crossed the start line under sail, closely followed by the remaining 12 boats in this departure, a spectacular sight with multicoloured spinnakers flying in the gentle breezes. Our start is on Wednesday but we'll be one of the competitors then rather than the committee boat! 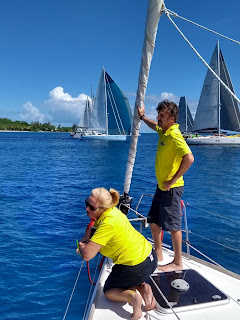 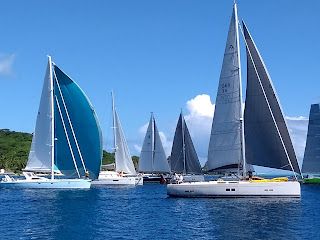 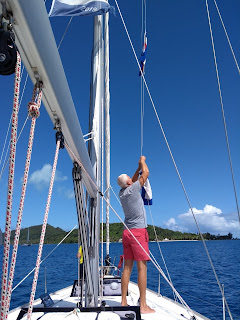 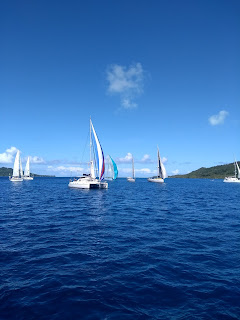 The protective sun strip on the jib (front sail) is in need of replacement having suffered chafe from the parasailor sheets (lines). Nicky, a friend on one of the other boats, has kindly offered to do this for us as she has a marine sewing machine on board. So this afternoon we planned on taking the jib down to start the work, only to find it jammed within a metre of us starting to lower it. We'll try to get it down again tomorrow otherwise it looks like it won't be getting repaired after all ….

It's lovely catching up with all the boats again after the two weeks with Jon and Hannah when we largely did our own thing, rather like being welcomed back into the family fold. A quick drink ashore yesterday afternoon turned into 3 hours of laughter and chat as we caught up on experiences and also plans for the rest of the year. 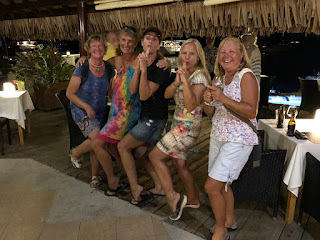