We had a great sail up to Bora Bora, after making a quick return to the pearl farm to get some earrings to complement my necklace ….it seemed rude not to! 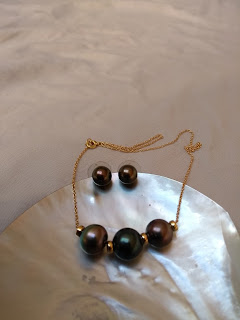 Anchoring behind Motu Toopua we had our final night with Jon and Hannah on board in an idyllic setting. Two other WARC boats were there so we all got together for drinks on one of them, nice to be reconnecting after a couple of weeks doing our own thing most of the time.


Bora Bora is one of the oldest Society Islands, a giveaway now we understand their formation so not as mountainous and with a bigger lagoon and reef, as evidenced by the numerous sizeable motu ringing the main island. It’s been inhabited since the 9th century and had a bloody past as tribal kings battled for supremacy. Peace only came just before the arrival of Captain Cook in 1769 (that guy certainly got around, we seem to be following in his footsteps). The Americans turned up in 1942 following the attack on Pearl Harbour and, finding no practicable roads and insufficient drinking water, set about remedying that situation and adding an airport for good measure. Today it is probably the best known of the Society Islands for luxury holidays and is certainly far busier than the last three we have visited.


So yesterday we motored around the north end of the island to drop Jon and Hannah off at their luxury hotel on the chain of motus fringing the lagoon. The security guard wasn't that impressed that we anchored outside the hotel - he zoomed over on his jetski - but relaxed once he understood we were dropping guests off!


Last night we were invited to join a group of participants dining at Bloody Mary's restaurant, a bit of a Bora Bora institution having opened in 1979. The food was good, as was the company, and our planned early night never materialised! 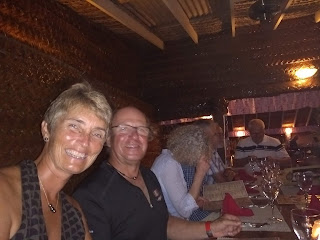 Today is all about jobs: cleaning Tumi inside and out, laundry, food shopping etc, in readiness for our departure on Wednesday 22nd. A trip to the dentist may also be in order as one of my back teeth has become very sensitive to temperature. I hate dental work at the best of times!


The new dinghy is scheduled to arrive on the island tomorrow, fingers crossed it does. We don't want any delays to our departure!