We had a great morning yesterday circumnavigating Bora Bora by dinghy along with two other boats. Such fun …. we stopped off to snorkel at the southern tip of the main island between two small motus where the water was crsytal clear and the corals were beautiful. The most remarkable aspect was the sheer number of fish: it was literally like swimming in an aquarium and we were also lucky enough to see a seahorse.


After lunch on board with friends, and a refuelling trip, the dreaded dental appointment time crept around. Despite all my fears the dentist was the best ever, didn't hurt me at all, but ended up having to pull out the offending tooth as the cavity was too deep. The dentist offered me the tooth but I didn't think the tooth fairy would visit so declined!!


Today has been all about preparation for tomorrow's departure: skippers briefing, provisioning, clearance out of the country etc etc. It's basically taken all day so tonight 22 of us are off to Bloody Mary's to bid Bora Bora farewell in style. It won't be a late night as we all need to get plenty of sleep before the departure at midday tomorrow, especially those boats sailing double-handed like ourselves. The forecast is for very benign weather so a lot of motoring is probably in our horizon. The passage to Suwarrow in light conditions is likely to take 5 days …. 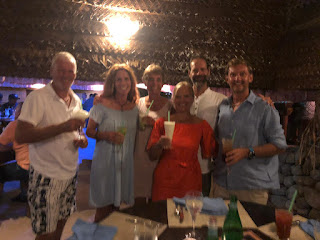 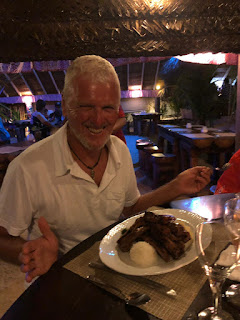