So on the morning of departure day we went ashore early to study the latest weather forecast and the upshot was no wind, and when some develops it will be on the nose. Useless! A discussion broke out over the merits of delaying the departure from Bora Bora until a better weather window materialises and then to head straight for Niue, bypassing Suwarrow. One of our biggest concerns is a lack of fuel. If we head for Suwarrow and have to motor most of the way as the forecast suggests, we would then have insufficient for the onward passage to Nuie should we need it. To compound the problem the refuelling option in Niue isn't easy: no fuel dock, requiring jerry cans to be used to shuttle fuel from the local petrol station by taxi, and a high wharf to have to raise and lower the cans to/from.


While the Niue-direct option is probably the more sensible, the pull of sailing enmasse is a strong draw and 10 of the 13 boats decided to go, leaving just 3 of us behind in Bora Bora. Fortunately the three of us that remained all sail at similar speeds and so we will travel together as soon as the forecast permits.


One of the advantages of remaining was the acquisition of a gold and pearl ring to add to my ever-increasing pearl collection! It's lovely and I'm looking forward to wearing them all tomorrow when we go out for lunch to a local waterfront restaurant that comes highly recommended. We had to check in with customs again at the Gendarmerie having cleared out on Tuesday in anticipation of our Wednesday departure, but they were very flexible and didn't require us to formally clear in again. A refreshing change from some of the bureaucracy we meet.


Before heading into town to the police station this morning we embarked on a hike to scale the mountain in the centre of the island with JF and Marie off Cassiopee. 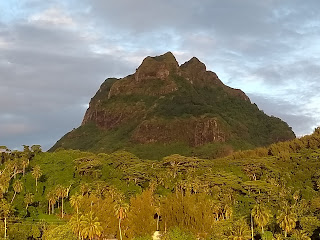 It had rained overnight and the trail was waterlogged and muddy so we were very soon mud-splattered and wet. We made it to a ridge where  two cannons are rusting away, a legacy of the Americans in the mid-1940s, commanding a great view over both sides of the island. 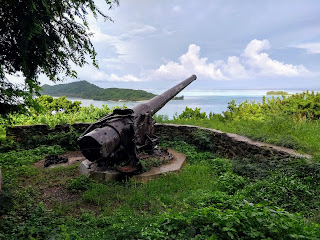 Not much further on the trail became very overgrown and as we pushed our way through the wet vegetation the thought of dengue fever crossed our minds. The skipper of another WARC boat contracted the disease in Papeete and was ill for a couple of weeks. Because Paul has had it before he can't risk catching it again as the second time it is haemorrhagic and very serious and so we aborted the walk and headed back to the boat.


We'll check the weather again in the morning but it's looking like a departure on Saturday or Sunday is in order. Fortunately there is a small island on the Cook islands chain, Aitutaki, that we can break our journey if the weather permits.