Happy anniversary to us, married 20 years today! I have to say I never envisioned spending my 20th wedding anniversary in the South Pacific on my own yacht having sailed here from England! But that's exactly where we're celebrating the day in a beautiful bay on a quiet Island, relaxing and enjoying being looked after by Jon and Hannah!


The bay we're anchored in, Avea, has two.colours of water, azure and turquoise, separated by a very distinct line, quite amazing really. The white sand beach is lined with palm-trees and the heavily vegetated mountains form the perfect backdrop. 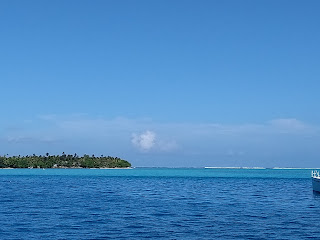 There are two other WARC boats in the anchorage and last night we were invited on Nikitoo, an Oyster 62, for drinks and dinner. What a beautiful boat, custom built with spacious interiors and beautiful lines. Definitely a case of boat envy!


We're having a lazy day today, a bit of snorkelling and sunbathing in this beautiful bay, a champagne lunch and afternoon snooze, before cocktails and dinner ashore this evening. Jon and Hannah have banished us from the galley so we have been waited on all day. Lovely! 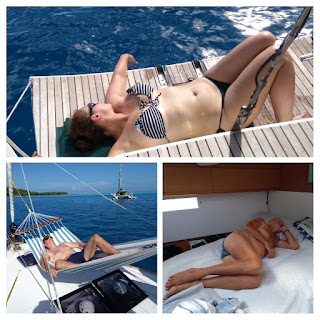 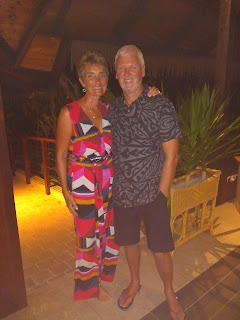 
After today Paul now has two things on his Christmas list: an ATV and a jetski! We enjoyed yesterday's ATV adventure so much we decided to combine it with the water equivalent and take a jetski tour around the lagoon today, and what an exhilarating experience it was. Flying over the crystal-clear lagoon at up to 60 km/h, admiring the corals beneath the turquoise waters and with the dramatic backdrop of the mountains. Amazing. I drove for the first our and a half as we made our way down the west coast of the island before stopping for a swim at the halfway mark. Then Paul took over with me riding pillion, hanging on tightly as we bounced over the water. It was a thrilling ride.

We stopped off to snorkel a coral garden at a small motu on the way back and had our first 'up close and personal’ experience with sting rays. So close did they come that one female appeared to give Paul a fishy kiss as he wallowed in the water filming! They were like dogs to some extent, hanging around playfully wanting attention. Our guide, Jay again, pointed out the barbs on their tails and said this is what they use in defence to kill a predator. If they use them they then have to grow new ones which takes about three months leaving them defenceless for that period. The females are a lot bigger than the males, the way they manage to survive breeding which sounds a particularly unpleasant affair: the male effectively bites the female on the back of the head to hold her in place. On the day of reproduction the poor female can be bitten over ten times as successive males breed with her. It doesn't sound very romantic to me!


The coral garden was nice but not a patch on that in Rangiroa. That said there were a lot of colourful and attractive fish swimming about so it was a pleasant snorkel.


Back on our jetskis we continued a little further down the coast to an area in the reef where we could swim with blacktip sharks as well as more rays. As soon as Jay got in the water several rays made a beeline for him, obviously recognising him by some means, and almost caressing him with their wings. They are very sociable creatures, like dogs are too. By contrast the blacktip were the cats of the underwater world, coming close to take food but then disappearing off as soon as they'd eaten what they wanted. No real interaction with we humans which, in the case of a shark, is probably not a bad thing!

We sped back to the marine base some three and a half hours later after a thoroughly enjoyable and exciting morning. Mo'orea has certainly ticked a lot of boxes for us all.


Tonight we're sailing overnight to Huahine, ninety miles to the north of Mo’orea. It's a peaceful, starlit sail, perfect for everyone on board.