It's been a busy (and expensive) week but we're well on the way to getting all the cleaning and maintenance done and with a final push this weekend on the cleaning front, Tumi will be looking A1 once again.

The marine engineers were here today to service the engine and generator, and to identify the cause of the steam coming from the engine exhaust. The servicing was done very quickly and the cause of the steam identified .. a blockage in the heat exchanger and faulty seal. A couple of spare parts needed and we'll be good to go! Paul also had his success today locating the cause of a slow freshwater leak that has been niggling us for a few weeks. As he suspected it was a joint that had worked loose and now he's tightened it we're dry again. Or at least Tumi is, we're still drinking wine!!!

We gave ourselves a day off yesterday and caught the marina shuttle bus into downtown Bundaberg, about 20 minutes drive away. It's not remotely touristy, a real Australian town, single storey buildings dating from the late 19th century lining wide streets laid out in a grid. It's claim to fame is Bundaberg Rum, closely followed by ginger beer, not quite as famous, probably because it's not alcoholic!! We bought a couple of souvenirs, a genuine kangaroo leather folding hat for Paul, and a didgeridoo ... we couldn't come to Australia and not buy one could we?!!! 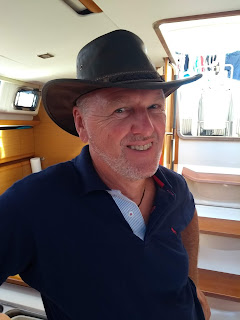 We walked into neighbouring Burnett Heads yesterday afternoon and saw our first kangaroo in the wild ... a very large male on the parkland close to where we were walking. Common place apparently but exciting for us!

We've had the anchor chain regalvanised this week and Paul collected it today, thanks to the kindness of the owners of a neighbouring boat who took him in their 'ute' (utility truck) to collect it. The chain is the shiniest it's ever been and will eradicate the rust stains we've been contending with for the last couple of years.

I collected the genoa today from the sailmakers. With the new sacrificial sun  strip they have given the sails a clean bill of health. Not bad for 5 year old sails that have brought us 26,000 miles or so.

We're hoping to continue on our journey south on Monday afternoon if the engine parts arrive in time. Fingers crossed!