We're sitting in the cockpit, camera and binoculars at the ready, in case a pack of dingos stroll by on the beach on their way to their water hole. Fraser Island has the purest dingos of anywhere, there having been no cross-breeding (had to smile, predictive text just changed that to cross-dressing!) and it would be lovely to see one, but not lovely enough for us to go trekking into the dry rainforest this morning! We set off on a trail but soon reached an electric fence that completely encircles the resort we're anchored off to keep the Dingos out. Armed with a stick each, part of the 'keep safe dingo' advice on the posters, we were about to enter the area outside the resorr when a sign put paid to the excursion. 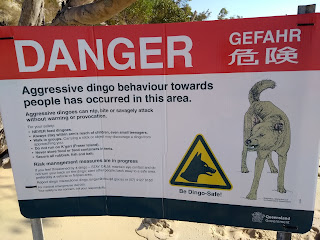 So here we are several hours later on the lookout from the safety of the cockpit ... it seems far more sensible!

We had a good if gentle sail down yesterday across Hervey Bay, on watch for the myriad whales we had been told to expect. Our reality was one sighting and we felt rather cheated! Hey ho, that's the way things go with wild creatures.

We've mentioned before that Fraser Island is the world's largest sand island measuring 120km by 15km. It's been inhabited for hundreds of years, the Butchulla people being the first inhabitants. The wind and waves have sculpted the sand into the island it is today with sand cliffs of up to 200 metres high, freshwater lakes and creeks (apparently there is enough water in aquafers to last 70 years) and areas of dense rainforest and wallum scrub (heathy wetlands). We joined a short hike this morning into an area of wallum scrub with a local ranger who pointed out the indigenous plants and explained how the Butchulla people used them in everyday life from food to medicine to bedding. A few flying foxes had also taken up residence in a paperbark teatree tree(?) ... apparently they are normally day visitors, returning to the mainland each evening, but the recent high winds have kept them in one place, much like they did to us in Bundaberg! 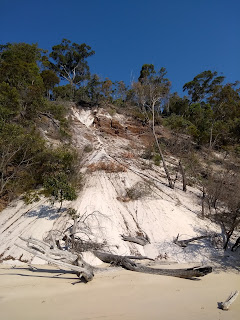 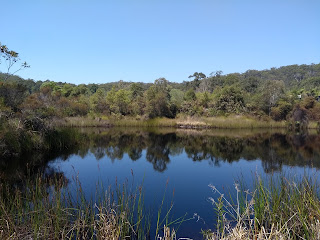 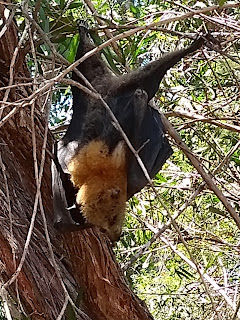 While it was exploited for its natural resources in years gone by (predominantly timber) Fraser Island is now a World Heritage site and has around 400,000 visitors a year. We had intended to join a tour of the island but decided against joining the masses ... not that we are antisocial, but travelling all day on a coach with forty others isn't for us! Instead we strolled along the sands marvelling at the tens of thousands of soldier crabs that had appeared at low water. They were everywhere but tended to disappear into holes as they felt the vibration of our approach. 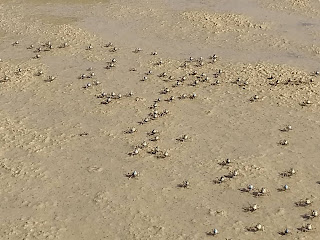 We'll be on our way again early in the morning to time our passage over a very shallow area of the Great Sandy Straits at high water, and then will have to anchor up for the day before tackling the notorious Wide Bay Bar on Monday at high water. Never a dull moment ... and now back to dingo watch in the cockpit with a sundowner!