This has to be one of our favourite town names so far ... Mooloolaba, close to Maroochydore and Noosa! We sailed down here over two days after our failed dingo watch, the first day negotiating the shallow waters of the Great Sandy Straits between the mainland and Fraser Island at high water. After a quiet night anchored in Pelican Bay, Inskip Point we braved the notorious Wide Bay Bar seaway (calm for us!) and emerged into the open ocean, turning south to head down the coast.

As we sailed along the coast we could see the wild fires inland along the Cooloola Shore, with plumes of smoke obscuring the sun. The drought in Queensland is very bad with many fires ablaze. This area of the coast is fortunately not densely inhabited, being a 'sandmass', which began building up over 500,000 years ago and is one of the largest accumulations of wind-blown sands along the Queensland coast. As we sailed by it looked like there were pockets of snow up high in the dunes, but these are actually patches of white sand. 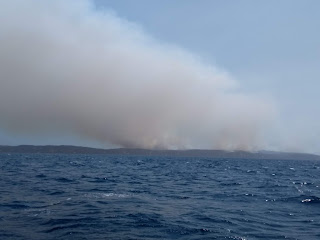 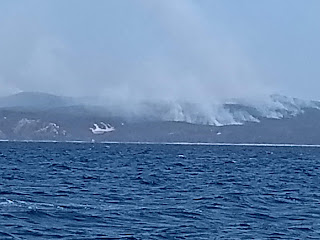 The weather conditions deteriorated over the 50 miles to Mooloolaba and by the time we were approaching the entrance to the Mooloolah River, protected by breakwaters, the swell was quite significant. It was certainly nice to get into the calm waters of the river, even though the current was at peak flow and we were moving along at 4 knots in neutral! Throw in the high winds then we were viewing our arrival in the marina with a degree of trepidation, especially given we were arriving outside working hours and there would be no-one there to help us with mooring lines. As it happens it all went perfectly!

We've hired a car for a couple of days and today ventured inland into the Blackall Mountains, about a 30 minute drive, before heading up to Noosa Heads, a rather sophisticated coastal resort/town. As with when we were exploring from Mackay, the climb into the mountains is steep and winding with spectacular views back down to the coast. 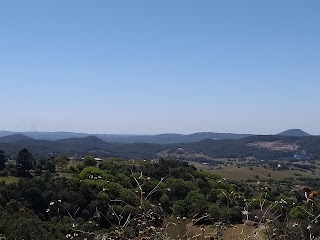 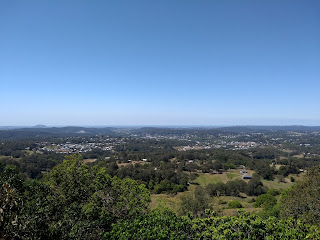 Prior to the arrival of European settlers in the 1860s, this area was heavily forested and the homelands of the Kabi Kabi people, but the land and the indigenous people were exploited as more permanent settlers arrived to establish timber felling businesses.

Our first stop was a lovely mountain village called Montville, very picturesque with some fabulous galleries and artisan craft shops. We would have liked to stay longer but had a lot to pack in so after an hour or so we headed for the coast at Noosa Heads.

Set on a beautiful stretch of beach, Noosa Heads is rather stylish with myriad boutiques and restaurants. We enjoyed a fabulous lunch in one of the seafront bistros before heading up to the nearby Noosa Heads National Park in search of koalas. 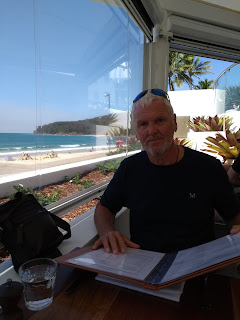 Sadly for us, as with the dingo spotting, we  saw neither hide nor hair of any koalas in the eucalyptus trees, but it was a lovely walk along the coast anyway. That's  despite both getting a crick in our necks from forever looking upwards! Hopefully we'll see both species at the Steve Irwin Australia Zoo tomorrow. One thing we did notice looking northwards was the smoke from the wild fires once again ... they really need some rain to extinguish them but there is nothing in the forecast. 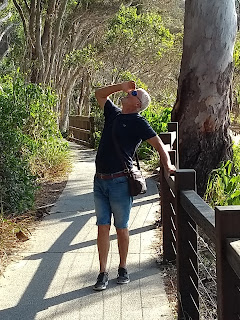 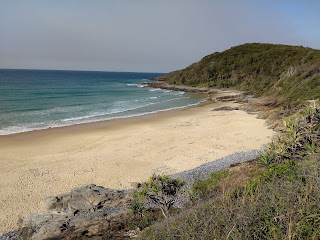 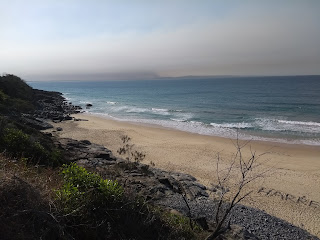 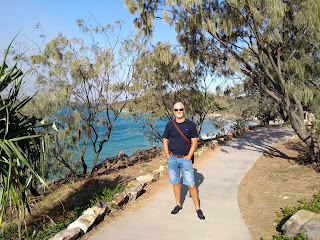 So all in all a great day out in the sunshine, despite the lack of koala!!