We're having a lazy few days here enjoying the sunshine and atmosphere, and lunching out each day given we don't expect to have much opportunity to do that in Cuba, and the Bahamas come to that, although to a lesser extent.  Yesterday we visited Ernest Hemingway's home (he was here with his second wife in the 1930s), something we didn't do on our last visit.  This trip has a big Hemingway connection however given he moved from Key West to live with his third wife in Havana and the marina we will be staying in over there is named after him no less.  Hemingway was a big presence in Cuba and lived there for 20 years before returning to the US and taking his life just before his 63rd birthday. 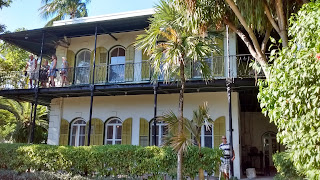 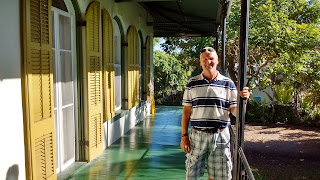 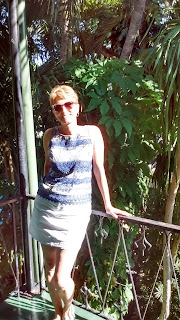 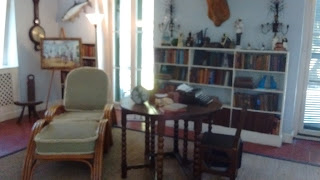 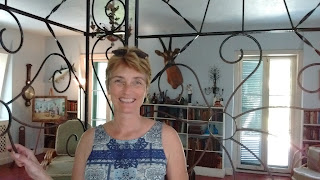 As for his time in Key West, he wrote about 70% of his novels here in a relatively short but obviously creative period.  His property was built by a shipping magnate in the 1850s and still had an outdoor cookhouse when the Hemingways bought it in 1931.  He converted the top floor of the neighbouring coach house into a studio and ran a cast iron walkway from the verandah outside the master bedroom of the main house directly to it using the cookhouse roof as support, so he didn't have to go outside and across the garden when his creative juices were flowing.

Hemingway was a bit of a one with women and had numerous affairs.  When he was involved with the woman who was to become his third wife, his then wife decided to install a swimming pool in the garden of the family home in Key West.  Not only did she site it on Hemingway's favoured boxing ring, but she spent $20,000 on it, a lot of money back in 1937!

Hemingway's home, like many in Key West, has metal roof tiles.  Following a fire back in the late 1800s it was decreed that all new and replacement rooves had to be made from metal .... won't burn and more resistant to hurricanes. This ruling still seems to be in place today.

It's looking like Wednesday evening is our weather window for crossing the Straits of Florida to Cuba so tomorrow and Wednesday will have to be about stocking up with provisions, including gas and fuel, laundry and being officially cleared out of the US so we have the right paperwork for entry into Cuba.  We've been told to take Canadian dollars (as opposed to US dollars) with us so today we went off to the Bank of America to exchange some, only to be told they wouldn't do it for us unless we had an account.  Fortunately we'd been chatting to a chap in the queue who has an account and so he ordered the Canadian dollars for us through his account.  Very good of him .... we could have been money laundering for all he knew .... but the kindness of strangers we meet along the way adds so much to our experience.

We probably won't be able to post anything to the blog whilst we're in Cuba but we'll takes lots of photos and will update it once we arrive in the Bahamas.
Newer Post Older Post Home