Well, we finally escaped from Queensland and have crossed the state border into New South Wales. After an overnight trip, more whale sightings (they literally are everywhere!) and a close shave with a fishing trawler, we arrived in Coffs Harbour at 2pm on Monday, settled ourselves into our berth (no help available as it was a public holiday out here for labour day) and had a relaxing afternoon doing nothing much before an early night to catch up on missed sleep.

On Tuesday, it was a very different story. We had been boat bound for three days and couldn't wait to stretch our legs again. We found a walk that wound its way through the forest on either side of Coffs Creek, through the town and back to the marina, taking in the botanical gardens along the way. 16 kilometers later, we were back on board and our legs were pretty tired!

Wednesday had us cleaning up and making preparations to have friends made on the rally for lunch. It turned into a very long lunch with them not leaving until 8pm but we had a lovely time relating stories from the time in French Polynesia.

On Thursday we hired a car to drive up into the mountains and see some of the very picturesque scenery in the Dorrigo National Park. The mountains here are even closer to the coast than in Queensland and the aptly named 'Waterfall Way' soon had us up on the plateau some 725metres above sea level. It was a steep and twisty climb, very dramatic with glimpses of the coast through the towering eucalyptus, red cedars and tallowwood trees. 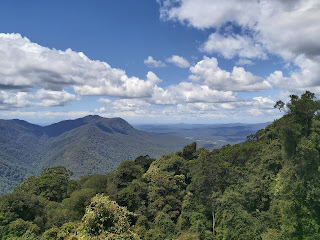 In years gone by, and we're talking millions of years ago, this former volcanic area (Mount Ebor was active for a million years, spewing lava which has made this such a fertile area) was covered in trees but the arrival of the European settlers in the mid-eighteen hundreds saw them felling the red cedar trees for timber and creating meadows for grazing cattle. It became a big butter area. The plateau is still farmed today and presents a bucolic scene.

Arriving at the rainforest discovery centre, and having recovered from our exertions of Tuesday, we hiked down to some waterfalls on the wonderfully named 'Wonga Walk'! 3.5 kilometres down and the same back up again. We deserved our lunch! 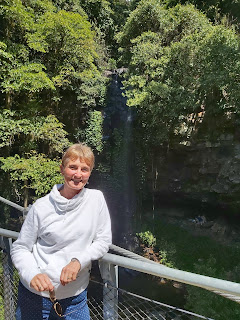 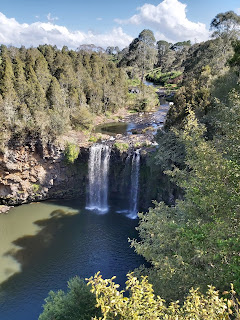 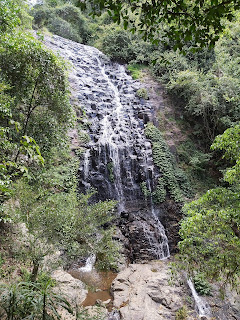 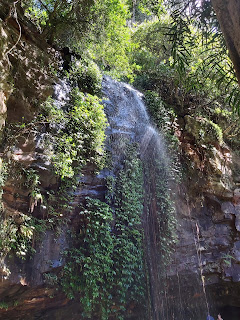 It's a shame that there has been so little rainfall for several months or the flow would have been so spectacular.  Even so, we were thrilled to see them and even managed to get behind one of them, the Crystal Falls.


As we walk through the rainforests here, (yes, they are rainforests, even though there isn't much rain!) one thing that has really become evident is that the birdsong is SO different from anything we have been used to during our travels. One bird in particular, an Eastern Whipbird is very noisy, and a persistent singer with a very distinctive 'whipcrack' call. The Kookaburra calls are also very distinctive, and the longer we are here, the more familiar they are becoming to us. We recorded it's call but the sound byte is copyright protected so we can't add the video onto our blog!

As we drove from Dorrigo through Ulong and on towards Coramba and Karangi, (lovely sounding names for towns here!) the tarmac roads just ended and we found ourselves on dirt highways for approximately 30km. Not the most comfortable ride, but what choice did we have? The car came back absolutely covered in dust, and if it hadn't rained last night we would have had to have stopped into a carwash on our way to return the vehicle! Even so the rental company looked at us rather askance when we handed back the keys.

Today we took a walk to the island next to the marina, Muttonbird Island, part of the Solitary Islands Marine Park and with views back down over the marina itself. 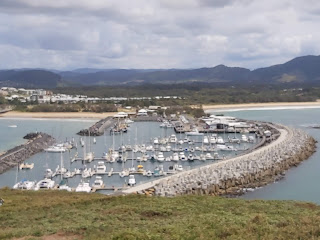 It is named after the migratory marine birds (short-tailed shearwaters) that nest there in burrows that they make on the hillside to protect their eggs and young. There were no birds in evidence as it's not the nesting season at the moment. 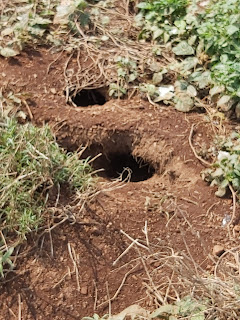 It's cold here today too, the southerlies have come back again bringing the Antarctic winds howling up the coast, so we have got extra bedding to sleep under at night, plus sweatshirts to keep us warm during the day 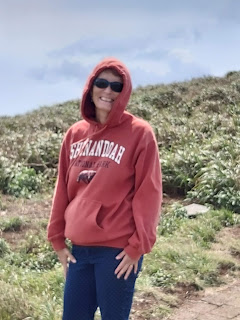 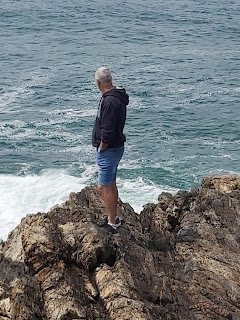 We have decided to stay a few days longer in Coffs and wait for the next batch of northerly winds to blow us down the coast to Sydney. According to the forecasts, we will have favourable winds to leave here on Monday, sail the remaining 240 nautical miles in one go, and arrive in Sydney Harbour on Tuesday evening. We're really looking forward to sailing Tumi under the Harbour Bridge, that will be another tick in the box and a fitting finale to what has been an incredible trip!