We had planned to have been in the Whitsundays by now but instead decided to order and have installed a replacement heating element in the hot water heater, something that failed in Vanuatu. We have needed to run the engine to heat the water and not be able to use the equivalent of the immersion heater in recent weeks and so needed replacing and the chandlers here in Mackay were able to source the spare so it seemed too good an opportunity to miss. Anyway we now have lashings of hot water again, all the more important now we are in cooler climes!

This morning we ventured into downtown Mackay to join a heritage walk around the city, learning the history of the town and its forefathers. The town first came into being in the mid-19th century, named after John Mackay and Englishman cattle farmer who established the first ranch in the area. In those days the river wasn't navigable, there being a long sandbar blocking the entrance to it, but one of the many cyclones that have hit the coast over the centuries washed it away and the Port of Mackay came into being. The first ship was tied up to a tree in 1862 and the tree remains growing today some 157 years later.

A particularly strong cyclone with an associated 6 metre high storm surge devastated the town in 1918 washing away most buildings and depositing ships and boats well inland, including one on the top of a hotel! Many able bodied men were away at the time and the town lost all power and communication, only being able to notify authorities in Brisbane when an enterprising local flashed a message by Morse code to a vessel offshore.

As a consequence of this cyclone, a lot of rebuilding was undertaken in the 1920s and Mackay has a definite Art Deco feel to the place. We learnt that there are different Art Deco styles: Hollywood, Liner, Egyptian etc and Mackay town centre has examples of most. 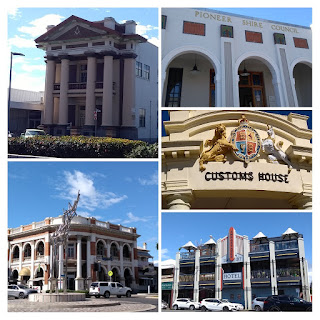 All being well we'll be on our way north to the Whitsundays tomorrow!