We hired a car today to venture inland today along the Pioneer Valley to the Eungella (pronounced young-gulluh for some reason!) national park, some 85 kilometres west of Mackay. The valley itself is named after the river flowing through it and is a big sugar cane farming area with almost the entire valley floor in the lower reaches planted with the stuff. Sugar cane has been grown here since 1867 and small trains cart the harvested cane alongside the highway back to the sugar mills. The waste cane, after being processed, is used as animal fodder and this supports the areas secondary business of cattle farming. 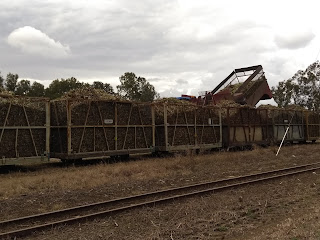 Our first impressions of the Queensland hinterland were very positive, the lush valley with its backdrop of mountains brooding in the distance. Passing through several small townships it seemed very reminiscent of the American mid-west, one horse towns with a general store and not a lot else but pleasant enough. 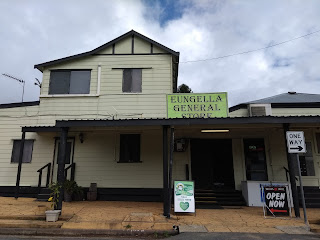 Reaching the head of the valley the road climbs steeply in a series of hairpin bends up to the mountain village of Eungella itself, meaning immediate land of clouds, and we could see why! The village itself was in the clouds and the commanding view back down the valley was shrouded in mist. The village marks the start of the largely inaccessible national park of the same name, climbing to nearly 1280m and covering 500 sq km of the Clarke Range. It was lovely with what felt like high Alpine meadows where cattle and horses are raised. In some ways it reminded us of the plateau on Nuka Hiva, except for the temperature difference ... it was only fourteen degrees up in the clouds yesterday! Despite the temperature the vegetation is very tropical/subtropical with myriad palms and ferns towering above us as part of the rainforest. Apparently this tract of rainforest has been isolated for thousands of years and boasts several unique species of flora and fauna. Whatever, it was beautiful, lush and green, shrouded in mists. 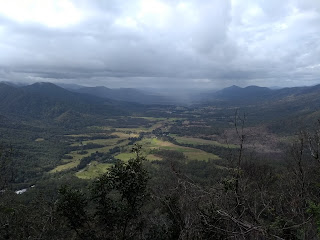 One of the reasons people venture up here is to see platypus in the wild on the Broken River. We were lucky to see two: apparently the best time is just after dawn/before dusk and we were there at midday but the two we saw were busy about their business, seemingly unconcerned about our presence. Lovely. The river is also home to snapping turtles and brilliant azure kingfishers and we saw the lot. Yeah! 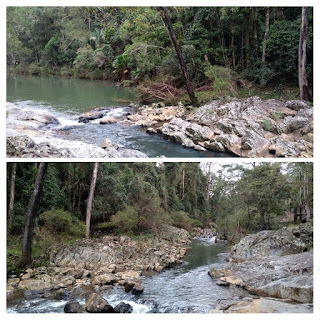 Close by is the Finch Hatton Gorge, a series of tumbling waterfalls, cascades and deep pools in a boulder-strewn river set deep in the rainforest. The approach road itself Ford's the river several times before abandoning the car to hike a mile further into the forest to the Araluen Falls. Beautiful and a great place for a dip on a hot day, but not yesterday!! 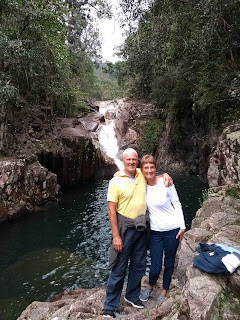