We're enjoying our time in Airlie Beach, the ease of access to restaurants and shops, the smart marinas and nicely landscaped boardwalk along the bay. Money has obviously been invested to lift it from the old loud and brash gateway to the Whitsundays it was always considered to be. We haven't found it to be like that at all. 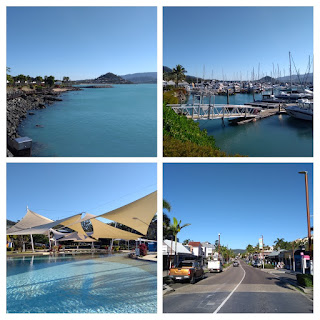 All that said it is still a tourist town with tours out to the islands departing throughout the day, so we decided to hire a car and go in search of real Australia which we most definitely found in the small townships of Bowen and Dingo Beach about an hour's drive north of Airlie.

Bowen is a classic reminder of a typical small Queensland coastal town of the 1970s, or so our guidebook informed us. Wide streets, low rise buildings, wooden buildings, and next to no-one around. That is until we discovered Jochheims Pies up a side street. More of which later.

Bowen was founded in 1860 and was the second biggest and busiest port in Australia at the turn of the last century. The first flying boat, named Corialanus, landed here, a variety of mango is named after the town and the movie 'Australia' starring Nicole Kidman and Hugh Jackman was filmed here in 2007. Nowadays however the town feels like it is in decline with many shops empty and few visitors, but everywhere is spotlessly maintained and as with other places we've visited there is an absence of litter and graffiti, refreshing to see.

The other thing Bowen is known for is the colourful murals depicting the various events and facets of the town's history painted on walls throughout the centre of town. We didn't find all 24 of them but the ones we did see were very detailed. 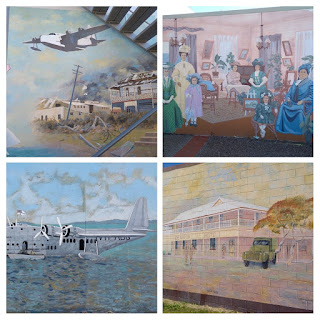 And now back to the pie shop! Started in 1963 by a man and wife team, Darcy and Merle Jochheim, the business today is now run by their daughter Jayne and her husband Paddy. While much of Bowen seemed like a ghost town, Jochheims Pies and Bakery was heaving with locals sitting outside enjoying morning coffee, and early lunchtime diners (ourselves included) tucking into pies inside. The place was buzzing, spotlessly clean and the pies delicious. I opted for meat and pea pie (minced beef in gravy topped with a layer of mushy peas ... obviously not just a UK delicacy after all!!) and Paul went for the spicier beef and chorizo. 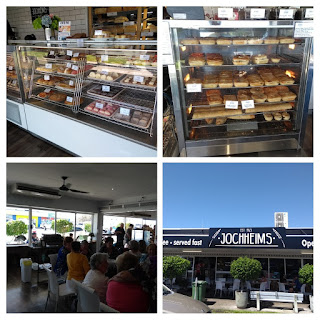 I got chatting to Jayne, and she happily told us all about the business and filming of Australia, pulling out a photo album from that period. The streets of Bowen were covered over with earth and 400 cattle driven through town, while a film set was erected on ground just outside town. Many locals rented out their home for AUS$2500 a week, a real windfall for them, and others were extras in the movie. Apparently Hugh Jackman loved the beef pie and was a regular diner. We think the town of Bowen is still a little bit starstruck!!

Our return took us through the sleepy village of Dingo Beach on the Cape Gloucester peninsula, a few houses backing a pretty beach. Unlike the drive to Bowen through fields of sugar cane, getting progressively more arid, the drive along the mountainous peninsula was far more scenic with cattle grazing and signs warning of kangaroos and wallabies. We didn't see either, well not live specimens anyway!