What a beautiful out of the way group of islands. Still part of Fiji the terrain is as different again as wet and lush Vanua Levu, being sunny and quite arid. Still the ubiquitous palm trees but scrub rather than trees covering quite bare hillsides. But white sands, turquoise seas, smiling locals and did we mention the sunshine!! 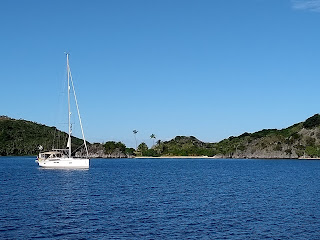 Our first port of call was in a bay near the Suwa-i-Lau limestone caves towards the northern end of the chain. The whole area is very poorly charted so using satellite imagery and eyeballing the reefs and colour of the water from the bow is essential: there's no way you could arrive here at night. In a fit of enthusiasm Paul decided he would have a better view of he stood on the boom so up he went, only to rick his back when he climbed down again just before anchoring. So that's him laying out flat and on pain killers for a couple of days!

Fortunately we are travelling in company with Peter and Nicky on Chanto and so they kindly ferried me ashore to the local village with our gift (sevusevu) of cava for the chief. It was my first ceremony and I approached the group of men sitting cross-legged on a tarpaulin with a fair degree of intrigue. They invited us all to join them and so, casting aside our shoes, we also say cross-legged and offered our gift. One of the four started chanting in a foreign tongue and then all four started a rythmic clapping as the chanting continued. And then after a matter of a few minutes it was all over and we were free to explore ashore all around the bay.

I'd asked three local ladies on the beach for directions to the chief's house as we landed and on our way back to the dinghy they invited us to their village to look at their handicrafts, so we duly followed on and bought an item or two. 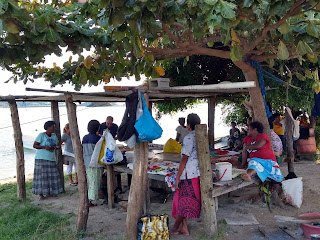 The village was obviously poor yet the school's rugby shirts were proudly trying in the sunshine, a real insight into the importance of the game to this island nation. 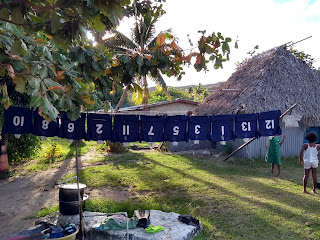 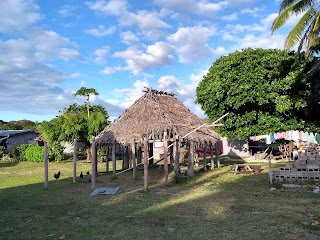 After a good night's sleep we awoke to a beautiful, cloudless morning with Paul's back feeling much better, although not good enough to join us in exploring the caves. So Nicky, Peter and I headed ashore to meet a guide who would take us into the caves. Donning masks and snorkels we entered the first cave which is open to the sky. While impressive enough it nowhere near matched those we saw on Niue, spoilt travellers that we are! The unique feature of these caves however is the 'secret' inner cave accessed by swimming a couple of metres  tunnel through an underwater tunnel. It all sounded a bit scary but Nicky and I plucked up our courage and in the company of the guide off we went. Taking a deep breath I submerged myself about a metre and kicked off towards the light the guide was holding to mark the exit. Surfacing into what seemed a pitch black Cabe was initially rather bewildering but my eyes quickly adjusted and I began to make out the walls and ceiling of the cave. And then Nicky spluttered to the surface and we set off swimming deeper into the labyrinth of the cave network. How brave am I?

My underwater exit from the cave wasn't as easy as going on, partly because I was hurried by the guide, but we exited safely both very proud we'd done it.

That afternoon we motored 10 miles south to the next island and Blue Lagoon anchorage.

A small resort ashore offered us the chance to enjoy sundowners, and what a sunset it was!