We are in the marina here getting ready for our next leg of our odyssey which takes us to the islands of Vanuatu. We haven't been in a marina since Papeete and it is a good opportunity to charge the batteries fully ready for the next period until we get to Mackay in Australia. As usual when the rest of the fleet are together it is party central. Last night we had a drinks reception, followed by a BBQ (we were almost the last to leave the party, and our table at the end of the evening consisted of 1 Austrian, 3 Aussies, 1 Swiss and us). A truly international gathering! 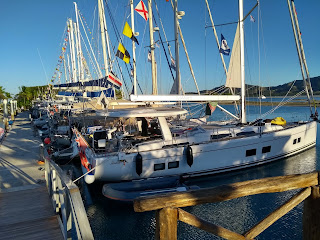 Today, we have been for an early morning hike around the island with some stunning views of the neighbouring island of Viti Levu (the largest of the Fijian islands and the seat of power/government with about 75% of the population living there), we have beach games at 11am, and a traditional Fijian Meke feast tonight (a hog roast cooked in underground ovens on hot stones). Debra just about has time to fit in her massage between it all! 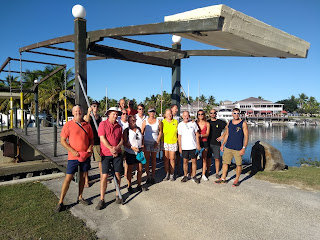 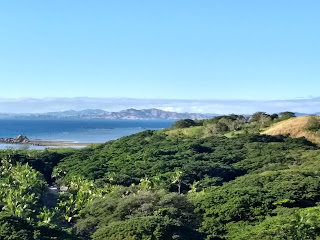 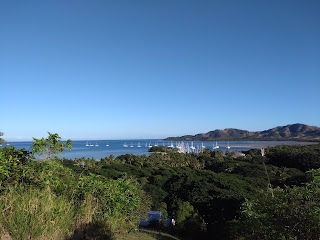 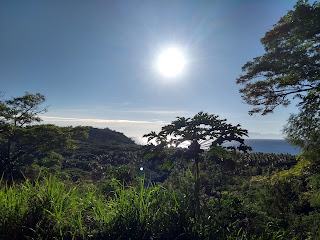 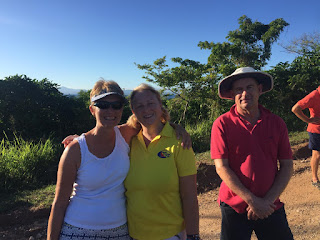 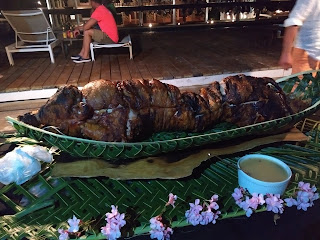 When we arrived in Musket Cove, we anchored off the reef for the first night so that we could get some breeze (sometimes in marinas, it becomes somewhat airless and the inside of the boat can get very stuffy) and we took the opportunity to go snorkelling on the reef. Surprisingly, it turned out to be really good, with many varieties of fish that we had not seen before. Also, the wind picked up in the night just in time for our entry into the marina which is very tight and makes manoeuvring a bit tricky, especially when we have to do a stern-to mooring which involves dropping the anchor as we are reversing up to the dock, and tightening the anchor chain to stop us drifting backwards into the dock. Well, we managed it OK, not quite in the spot we were supposed to end up, so they moved us sideways by hand to allow space for Chanto to slide in between us and Chao Lay. Ho Hum! 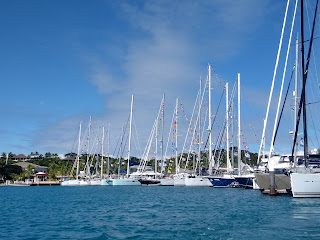 The resort here is very laid back and feels rather cosmopolitan after the remoter places we have been in recently. We have availed ourselves of the fuel dock, swimming pool, shops, eateries and bars, all without the need for currency: it's all charged to our account so I hope it's not too much of a shock when we get the final bill! And that's not forgetting Debra's spa treatments of course!

We have really enjoyed having good internet access again all the time we have been in the Fijian islands. Apparently the Prime Minister has made it his mission to ensure all Fijians have a good service wherever they live in the islands. It rather puts our service back at home to shame: Chagford is still rather hit and miss for mobile reception. The 30GB of data we bought here to be used in 30 days has been a challenge, even for us! We probably will not have anything like this access again until Australia when our home from home service from '3' kicks in, so apologies for any delays that we might have before our next blog.

Tomorrow we have to clear customs and immigration, get our skippers briefing for the next leg and on Saturday we leave Fiji.