We set sail early in the morning to head over to Erromango, a journey of just under 50 miles from Port Resolution. With the winds being somewhat variable, we had to motor sail for half the trip, but when the breeze picked up a bit we turned the engine off to get some peace. Sailing at a sedate pace, we were overtaken by all the boats that were flying their spinnakers but it didn't matter, we got to the anchorage in good light and dropped the hook in about 7 metres of water.


Overnight, the swell picked up and all the fleet were rocking and rolling. This means that we don't sleep well, if at all, and we woke this morning feeling rather tired but with another action packed day ahead.


The day kicked off with a dinghy trip two bays away to visit the skeleton caves. The caves had many uses, they were a refuge for the women and children during times of war, where they would be kept safe from the battle, away from the enemy who, if they found them would feast on their bodies. Cannibalism was the norm, and prisoners would also have been stored in the caves, awaiting their death and subsequent consumption. In times of cyclones, the caves were also a safe haven for the villagers to take shelter, safe from the high winds. 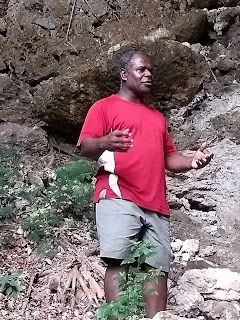 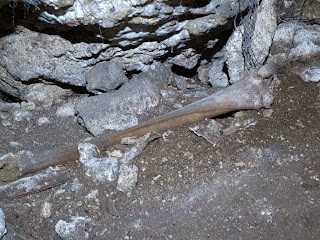 The Erromangans were very tall people, about 2.5 metres tall until about 100 years ago, around the time when cannibalism started to die out, and now, presumably owing to a change in diet, they average 1.7 metres in height. Apparently, during the cannibalism times, white flesh was considered something of a delicacy! Apparently wars between villages were rife, and raids would result in the capture of one or two high ranking people who would then be eaten. This brought about reprisal raids, and so it continued for centuries.


The villagers have been putting their dead into the cave for many years and the length of the bones support the height claims. The bones are randomly spread around the floor and on some rocks, and their only company now is a family of bats that flit around the ceiling above your head.


Their chiefs' remains have been placed into a smaller recess in the rock, higher up the face in an elevated position as befits the rank. We were allowed to take photos as long as we didn't disturb the spirits of the ancestors and bring their wrath down on the community. 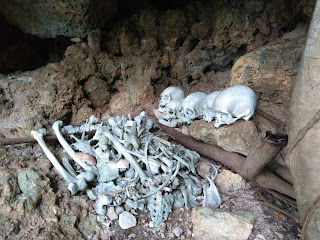 After visiting the cave, we returned to Tumi for a late breakfast bacon and egg sandwich which made the other crews very jealous, bacon has been in short supply for some time! And then it was time to head into the village for the official welcome and gift exchange.


The village here in Dillon's Bay is on the banks the Williams river, named after the first missionary who was subsequently eaten! Pulling the dinghy ashore on the rocky riverbank we were greeted by a group of young children, shy at first but soon chattering away as they helped us carry our gifts to the community centre. We were a little early arriving and so as Paul wandered back down to the river to help other dinghies get ashore, I stayed behind, chatting with the local ladies. One in particular was fascinating. She is the women's representative in the village and works to help women in finding themselves in violent relationships. Such is her success that she received an award a couple of years ago from the Australian High Commission in recognition of her work. Good for her!


We were invited as a group to enter the community hall where the local ladies and children greeted us with singing and dancing, different again from the African tribal influences we saw in Tanna. After a welcoming speech from the chief's son, David, we enjoyed al buffet luncheon the ladies had prepared for us alll. Predominantly fruit and vegetable based, they had however shared some of their small stocks of fish and meat, such is the importance of our visit. 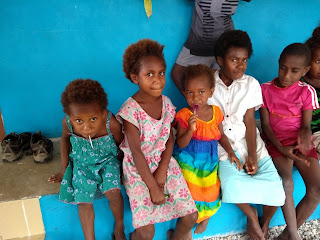 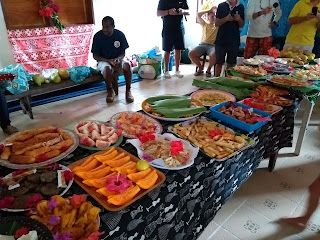 After eating our fill we wandered around the village, noting how well maintained it all was, and on to the 'yacht club'. Built by David, it is one of the few solid buildings in the village and he is justifiably proud, having by had to manually hack the area out of solid rock. Credit to him, he has a vision that the island will become more attractive to sailors and the 60 odd yachts that visit each year will increase in numbers. He already provided food for yachties, if he only sold beer too it would be far more appealing! 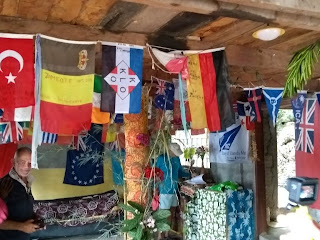 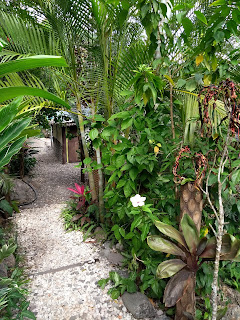 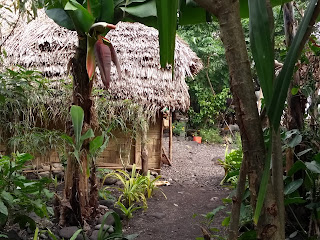 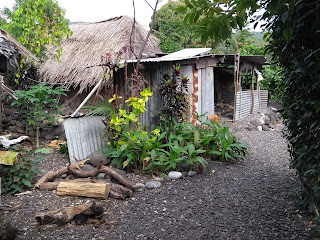 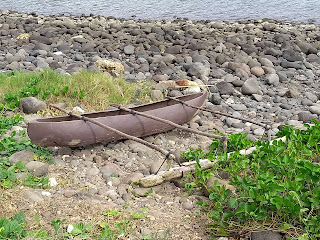 We couldn't have been feted any better than by the residents of Dillon's Bay village. Again a rather humbling experience.