We should comfortably arrive in Port Resolution, Tanna, Vanuatu by the end of our third day at sea. After the first 24hrs with high winds and big seas, conditions have remained calm and sleeping has been much easier. Fortunately the winds returned at 8.30pmlast night and we have been able to sail until 5am this morning. So overall 28 hours of motoring out of a total 74 hours at sea … not bad at all given the forecast.


Paul decided to fish again yesterday. We have found out that we can import fish into Australia so any more we catch can stay in the freezer. Amazingly he caught another Mahi Mahi, a bigger one this time measuring about 1.3m! So we enjoyed Mahi Mahi again for dinner last night and have frozen enough for another 7 evening meals. A lot of fish on our horizon! 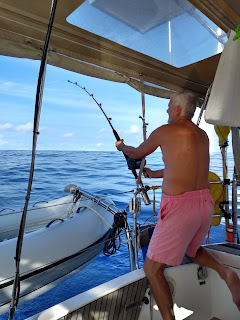 We're now only 5 miles from Port Resolution. Tanna looks a reasonable sized island but is shrouded in dark clouds on our approach. We're looking forward to investigating on shore over the next few days.


The winds held until 8.30pm on the second day and we have motored ever since! 14 hours and counting as I type and possibly another 20 or so to go. That said with little wind the sea is calm with only the slightest of rolls so much easier to move around and get things done.


As usual we are following the shortest route, caller the rhumb line and several others in the fleet are doing similar. We have been in sight of TinTin since we departed Fiji and have two other boats in sight too. Lots of radio banter, especially when fish are caught. And yes, this afternoon Paul managed to catch a Mahi Mahi, something he has been desperate to land since losing one off the line in the Bahamas in 2016. It was a beautiful specimen, about a metre in length, and iridescent blues/greens/yellow. Enough fish for 8 portions so we ate two yesterday and froze the rest. Delicious!! 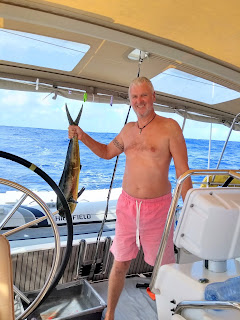 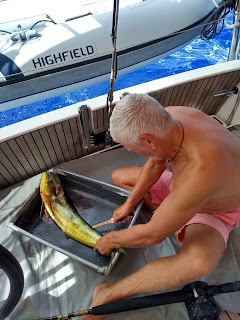 
We're nearing the end of the first 24 hours on the passage from Fiji to Vanuatu and the winds and seastate are both calming after a rather boisterous and lumpy ride. The good news is that we have covered 180 miles in the first day, up there in our top 10 daily distances of all time!


Having taken a two hour/fourteen mile lead on most of the fleet, we were discussing how soon we would be overtaken by one of the bigger/faster monohulls or catamarans. We both imagined it would be 10 hours so imagine our surprise that after only 5 hours Resolute II, something of a racing cat, passed us by. We'd been averaging almost 8 knots and a quick calculation showed they had averaged around 11 knots, not a speed we would ever achieve. Three hours later Sky, a 57' long monohull, stormed by followed Peikea a fast trimaran several hours later still. There's been a six or seven hours gap since Peikea but we now have four other of the 'big boats' hot on our tails but we're still doing pretty well all things considered!