It’s tattoo day! Phil and I had called into the tattoo studio on Monday to discuss what we wanted and to allow the artist time to design our respective tattoos. I wanted something traditional, utilising Marquesan symbols to represent what is important to me and what we are doing. So, I chose adventure, the sea, nature, friendship, family etc. I duly turned up at 9am feeling a little bit apprehensive but excited to be finally getting my tattoo. It has only taken me 62 years! The Marquesas are surprisingly the home of the tattoo, rather strange for such small, off the beaten track islands, and many tattoo artists in other parts of Polynesia hail from here.

Given I wanted a band all the way around my arm, it was a slightly more complicated undertaking than if I had been having a circular tattoo where in effect a type of stencil can be used to transfer the design onto the body and accelerate the process. Having approved the design, the artist then had to draw it on my arm freehand, first in red pen and then green. This took an hour and then he got to work with the needle and ink. It was a strange sensation, rather like having a series of mini-electric shocks, and the underside of my arm was definitely more sensitive than the outer arm, not painful but I was certainly aware of it being done. Some two hours later, making three hours in total, the final tattoo was complete, and I am thrilled with it. 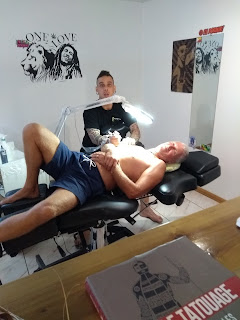 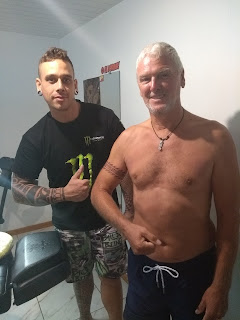 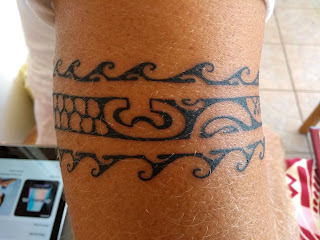 Debra joined me in the studio for the final hour and after questioning me about how much it hurt, she decided to go ahead with a very small complementary tattoo depicting the ocean and adventure. It was very much a “now or never” thing for her, and if the artist hadn’t been able to fit her in there and then she would never have returned. She opted to have the tattoo just above her right hip bone and, whether the skin there is more sensitive I don’t know, but she didn’t enjoy the experience at all finding it uncomfortable verging on painful. She was very relieved that her tattoo only took five minutes! 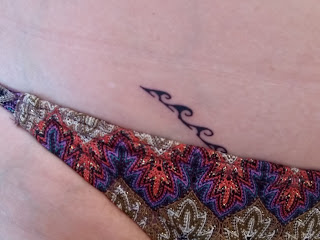 So now we both have a permanent reminder of our time in the Marquesas and the biggest adventure of our lives …. to date!