Well, here we are again, back in SH on Tortola, this time with our great friends Judi and Phil. The winds are still not playing ball as they have dropped off altogether and we have been motoring the last two days as there isn't enough to sail. We are not getting too angry though as we have been going short distances between harbours where we have been snorkeling and enjoying the baths (a jumble of massive granite boulders) on Virgin Gorda. 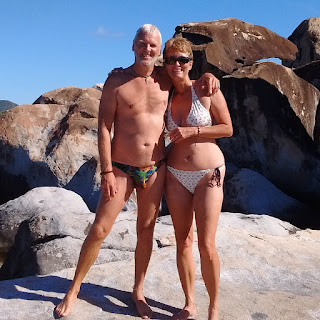 We spent last night in the Night at Norman Island and had dinner ashore at the Pirates Bar, a rather more expensive experience than we expected, but enjoyable nonetheless. 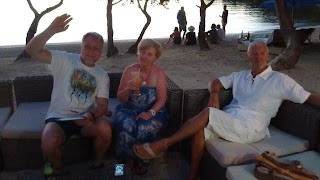 This morning Phil and I went snorkeling to see the caves where it was rumoured that pirate treasure was hidden, spawning the Treasure Island tale where Ben Gunn hid the vast haul. Sadly, no gold doubloons were to be found, but a treasure of wildlife and fish instead. We may go to the Indians tomorrow, another great site that I have not tried yet. The water temperature here is just perfect, and the clarity amazing. Long may it continue! We just need some wind in the right direction and we will be like pigs in muck!