We're loving it here: The weather has been in the low eighties; the people are friendly and welcoming and Beaufort itself is great.  It was voted the coolest small town in America some time ago and we can see why.

We've hired a car for a long weekend (Enterprise do an amazing weekend deal at $9.99 per day, and they collect and drop you off too  ... amazing) and are getting the chance to explore this part of North Carolina.  Crazy as it seems, this one state is almost as big as England, stretching from the Atlantic Ocean in the east to the Appalachian Mountains in the west where it borders Tennessee.  Our geography of the States has never been as good!

We drove down to Wilmington a couple of days ago, one of the historic sea ports of North Carolina on the Cape Fear river, a great name to inspire confidence in safe passage if ever there was one!  It was settled in 1739 by European Americans and has an attractive riverfront, being named the best one in the USA by USA Today in 2014.  Through in a historic downtown with many heritage buildings, a good lunch in the sunshine overlooking the river then it made for a nice day out.

We visited Fort Macon yesterday afternoon (after an exciting morning of laundry and hair cuts!) and found it really interesting.  It was constructed in the early 1800s by Unionists (the navy blue hat I'm wearing) but in 1812 was commandeered by the Confederates (the grey hat Paul's got on) in the US Civil War,  Eventually the Union Army claimed it back after a long battle.  It's been a state park since the early 1930s (give or take a short period in WWII when it was put back into service) and has been restored really well and shows what life would have been like for soldiers back in Civil War times. 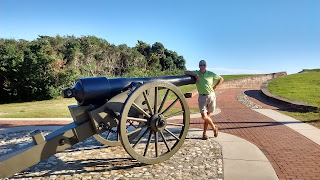 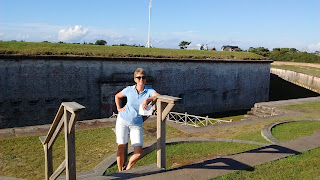 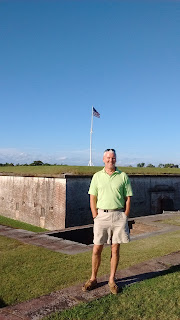 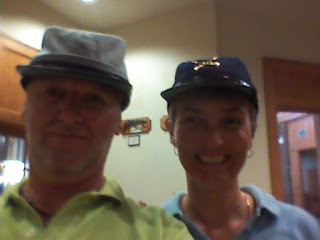 A cold front came through last night with high winds and lots of rain, plus a twenty degree drop in temperature!  This morning has dawned grey and cloudy but dry so after a brunch of bacon sarnies we're off to New Bern, another old European settlement (this time from 1710) which is also where Pepsi Cola was invented and is the site of a civil war battlefield.

We'll be heading south to Charleston, South Carolina in the middle of the week .... assuming the weather plays ball!