On a scale from one to twelve (a sailor's joke) Beaufort is pretty nice. We came in last night having rounded the dreaded Cape Hatteras in 40 knot winds (Beaufort Force 8/9 Gale/Severe Gale) with several reefs in the sails and still bowling along at just under 9 knots, and then having to run the engine because the wind died altogether. Who said sailing was easy? Actually, it was much easier than we expected rounding the Cape.

Once around the Cape, we were just on the edge of the Gulf stream and what a difference in the temperature! The warm body of water raised the air temperature by a good 10 degrees and we were able to (needed to) shed layers of clothing because we were too hot. I can see why the UK is so temperate with the Gulf Stream running by our shores. Anyway, I decided to try my hand at fishing using my new rod and reel, and guess what? 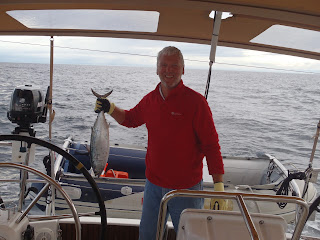 Not bad for a beginner? It was a Bonito, sadly not very good eating, so I put it back. Next one will be a Yellowfin Tuna and then it will be Tuna steaks and Sashimi!

We piloted our way through the navigation lights that Beaufort has to offer (quite confusing at night with so much light clutter all around) and dropped anchor in 5 metres of water close to the Coastguard station where it was really sheltered. I was in the shower and looked outside to see a coastguard launch coming towards us with its lights flashing. They clearly weren't happy with where we had stopped and a party of 3 coastguards came alongside. We were within their exclusion zone and they wanted us to move. We feigned ignorance but they were very polite in insisting that we moved further upriver, which we duly did. This morning we moved around in the daylight to our present anchorage, right next to Downtown Beaufort and less than 50 metres from the dinghy dock. Very nice too! 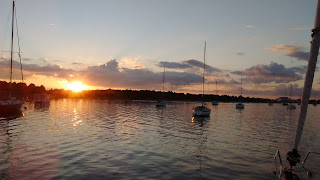 There are some islands on the seaward side of our anchorage that are inhabited by wild horses. Apparently they originate from the Spanish ships that foundered on the coast in the 1600's and have adapted to living in marshy grounds and eating salt oats. 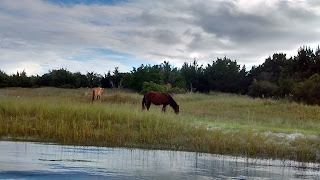 We are hiring a car tomorrow to explore inland, taking advantage of the Enterprise $9.99/day weekend rental offer so we can go shopping and sightseeing. The weather is due to deteriorate next week so we will probably head out from here on Monday or Tuesday. We will see. The weather forecasts change so quickly it isn't worth worrying about it until nearer the time.
Newer Post Older Post Home