We have been looking forward to visiting Savannah as it has been recommended to us by a few people, so we hired a car and drove down from the marina at Hilton Head Island where we have tied up for a few days to let the bad weather pass us by. We took a trolley bus ride around the historic part of the city and oriented ourselves on the layout of the roads and the 22 parks that divide them.

We had booked lunch at the Old Pink House restaurant for 1pm and the trolley bus tour took us up to 12:30, just time to walk from the Market to the restaurant. On perusing the menu, we found fried green tomatoes were on offer, which made us think of the movie Fried Green Tomatoes at the Whistlestop Cafe. Never having tried them before, we both opted for crab cakes and FGT's with fries. Really good food, and the as the meal was presented, the FGT's sandwiched the crab cakes, so it was a healthy option too.

As it turned out, the meal was the highlight of the day. 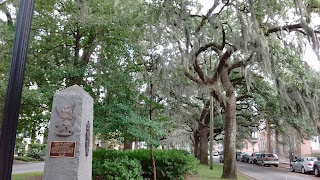 All the trees in the parks were covered in Spanish Moss which looked pretty, but our expectation of seeing lots of very ornate wrought iron balconies was higher than reality. There were some that we noticed on our trolley tour, but we were unable to find many of them as we walked the streets. 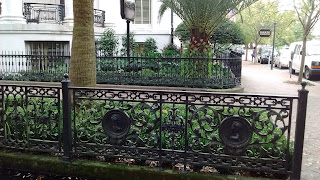 We did pass the police station where they were displaying some old police cars that apparently you can take a ride in, especially if you commit a felony! 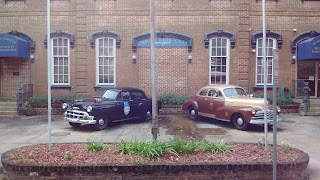 And as usual with state capital cities, the capital building is very ornate. This one has a 24 carat gold leaf dome. 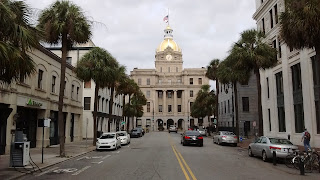 We are glad we visited Savannah, but we won't hurry to go back there. As it was, we needed to collect a propane tank that we had ordered from Home Depot which was being delivered to store nearby so we drove out to the Thunderbolt retail park and collected it late afternoon. We had the tank filled at another store a few miles from Home Depot and now we can relax a bit with the knowledge that we are not likely to run out of gas for cooking for a good while. Who said that sailing is exciting?