We're back in Grenada again enjoying the sunshine and warmer seas. It is definitely cooler in the water in the islands north of here. The sail down from Martinique was a pleasure cruise. The winds were kind to us and the current was in our favour too. We passed pods of dolphins on the way,  including one particularly large one. We helmed all the way between us, stopping off for the night in Tyrrel Bay on Carriacou under the quarantine flag for a few hours sleep and we were off again on the last leg to Prickly Bay. Goose winging as we crossed the strait between Grenada and Carriacou, we passed close to Kick 'em Jenny, the underwater volcano that stirs up the seas around its some, but we passed it unscathed and continued on down the leeward side of the island. This is the sort of sailing we love to do. 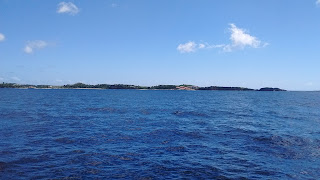 By contrast, life since we got here has been simply maintenance and cleaning, both inside and outside the boat. I had to fix a dodgy navigation light yesterday. It had been showing an intermittent fault on our way south, so I took it apart to see what the problem was. It turned out that the terminals had corroded and it was working only when the wires touched. Anyway, I went to the chandler's to get some new terminals that compress around the wire when heated. Not cheap, but waterproof and that part is important as the light is on the bow and gets wet constantly. Anyway, it is fixed now. The other thing we have done is clean and polish the hull and topsides. Tumi positively gleams now, and the steelwork shines. We've hated doing it, it's hard work in the relentless sunshine, but the end product justifies the effort.