A new year beckons, new adventures on the horizon

We have pretty much exhausted our travels in the eastern Caribbean now and it is time for us to plan some new adventures. We have decided to join a rally almost as soon as we return to Tumi in early November that will take us down to the ABC islands just north of Venezuela (Aruba, Bonaire, Curacao) then on to Santa Marta in Columbia, then to Cartagena for new year, which apparently is spectacular. From there we will progress to the San Blas islands where we will join up with the World ARC rally in time to go through Panama Canal and into the Pacific. Exciting times ahead!

Speaking of new year, we are anchored in Freeman Bay, part of English Harbour on Antigua. It is a really pretty anchorage, but it is notoriously busy and all boats tend to do 360° pirouettes during the course of 24 hours. It makes for some interesting close encounters as the boats are any which way but the same which is normal in other anchorages, but since we are sitting in a bowl, the winds swirl and eddy as they please, taking the boats with them. Still, we have fenders out on both sides just in case (as do all the other boats), so we should hopefully be OK. The reason we are here is that there are fireworks at midnight, being set off from Fort Berkeley, a rocky promontory that guards the anchorage from marauding French frigates (they are still trying to invade British territory) and which is 50 yards away from us, so we should get a prime view of the pyrotechnics. We have also been invited to join some sailing friends for drinks and snacks on the quayside this evening so we will be baking this morning to prepare our offerings.

As we came into the anchorage yesterday a classic sailing yacht was just making sail and leaving the harbour. Beautiful sleek lines and a picture to behold. 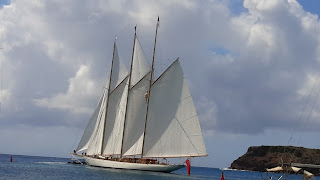 We watched a very serene sundown a few days ago and were rewarded with a perfect green flash as the sun dipped below the horizon. That is the second flash in 2 weeks, unusual indeed, but always a pleasure to see. As the sun was dropping down rapidly the first time, I mentioned to Joan (Debra's mum) that there might be a green flash any second, she replied with "wait a minute" and continued drying up the dishes. Needless to say that five seconds later it had come and gone and she missed the opportunity to witness such a rare event. Nature waits for no man.

Looking back at the year, we have had some tough sailing conditions, but thankfully we have weathered the storms. We have also enjoyed some great sailing days. Tumi has performed brilliantly throughout and is a pleasure to sail. Long may it continue.

Happy New Year to everyone, may your journeys be ever fruitful, and may the water remain under your keel!
Newer Post Older Post Home