We sailed down here yesterday having spent three peaceful nights in Deltaville in Jackson Creek. There is a VERY narrow channel that allows access to Jackson Creek, and although the channel has markers to indicate where the deeper water is, they lie. Passing close to a port side marker on the way in, we ran aground. What??? We managed to back off the shoal and more or less ploughed our way into the creek where the water was deeper. Anchoring in 3 metres of water (we draw 2.4 metres) we settled for the next few days, enjoying the use of the marina's bikes and laundry to do the shopping and washing (such is the life of the cruising sailor, very mundane!)

Anyway, yesterday was our time to leave Deltaville. We pumped out the holding tank (always a nice task, especially as I got a bit of blowback on this occasion), topped up the fuel tank and filled 3 fuel containers as a reserve, and headed out. Bearing in mind we had touched bottom on the way in, we steered even closer to the green marker and ran aground before we even got there. Backing off the shoal, we let a catamaran go ahead of us and we tried again. Oops! aground again by the green marker, even though the depth gauge read 2.8 metres. Backed off again and repeated the ploughing action to get past the mud bank. As we progressed through the channel, it felt as though we were on the cusp of touching bottom all the way through, getting slight 'tugs' on the keel as it passed through the silty bottom. Eventually we were out and into deeper waters and could breathe a sigh of relief. Even though we have towing insurance, we don't want to end up stuck on a shoal for hours on end.

Once out into the Chesapeake again, we had a good sail for most of the journey south to Norfolk where we have berthed up in the same dock as we were earlier this year. Tumi beautifully shoe-horned herself in between the pilings and we are tied up nicely with the added bonus of shore power to deep cycle charge the batteries and to run all our electrical stuff as much as we want. There are two other Ocean Cruising club boats here as well, and we have all been invited for a barbecue this evening by the OCC Port Officers. Such a good community to be a part of. We are also planning to catch up on the latest movies while we are here!

On the way by the US naval dockyards, we saw three aircraft carriers sitting side by side waiting to be worked on. That's more than the British navy have in total. Makes you think doesn't it??? 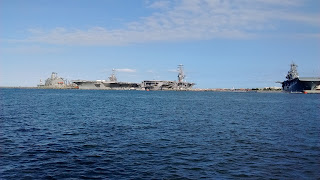