In the last week temperatures have plummeted, especially at night and when the wind is blowing from the north.  We've gone from shorts and T-shirts to sail to multiple layers, hats and gloves ... quite the change!  This last weekend in particular has been cold, down from the low seventies to the mid-fifties, but fortunately we're now back into the low seventies for a few days as the wind had swung round to the south.  Typically it's from the south when we want to sail south, just as it was from the north when we wanted to sail north!!

We visited St Michael's, Maryland, on the eastern shore of Chesapeake Bay for the weekend, having had a great sail over from Annapolis.  It's a lovely small town, obviously home to the retired wealthy looking at the shops and restaurants there, very scenic and well maintained and we enjoyed looking around.  Visiting Virginia and Maryland are States we would otherwise never have been to, as will be the same with North and South Carolina and Georgia, so it's proving a great opportunity to explore. We've had beautiful sunny days for nearly two weeks now and the trees are turning a lovely colour. 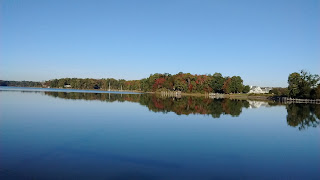 We're heading down to Norfolk for the end of the week where we'll wait for a good weather window to sail back around Cape Hatteras to North Carolina.  We don't really want to go south of 35 degrees north until after 1st November as our insurance excess should there be a named storm goes through the roof.  It's only up to the rafters in November and then from the beginning of December, when the hurricane season officially ends, it's back to normal.  Fingers crossed no named storms in November!

Chesapeake has now got that end of season feel to it.  Many local boats are organising hauling out for the winter and cruising sailors are fast heading south, in fact most of them are ahead of us.  Even the Canada geese flying in formation overhead on their way so we better up anchor and follow!