The last few weeks have been somewhat frustrating for me. When we returned to the boat in Cape Canaveral after the Christmas break one of the inflatable tubes on the dinghy had sprung a leak. No problem,  I thought, I have a repair kit, I will just put a patch on the leak and that will be that. No such luck! I duly put a patch on the affected seam that had given up the ghost with plenty of overlap for good measure, allowed it time to set and then pumped it up again. A few days later, it was soggy again, obviously I hadn't covered it all. So I put another patch on next to the new one because the leak had moved along the tube. Still not enough. Several more patches and the dinghy is looking like a quilt, and I am still having to re-inflate every day. It is so annoying. 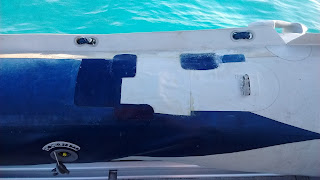 We have decided that we need a new dinghy, and the new one will be a rib with a solid floor, but this one needs to last us the next 4 weeks until we haul out for the summer. Let's hope it does.

The sailing has been a delight lately, with brisk winds and sunny skies, and the calm turquoise waters of the bahama bank. We have really enjoyed our visits to some old haunts, particularly Warderick Wells in the Exuma State Park, and Big Major Spot, near Staniel Cay. We have made new friends along the way and caught up with some longer standing ones too.  Everyone is very friendly and the cruisers events we've attended good fun and a good source of information.

The colour of the water in the Bahamas on the bank is simply awesome, we have seen huge stingrays gliding around in lazy circles and sharks resting on the seafloor below the boat in crystal clear waters. It doesn't get much better than this. 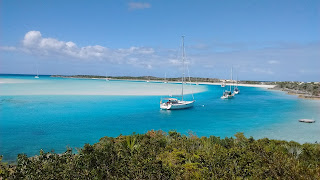 Over the next couple of days we'll head south to Georgetown at the bottom end of the Exuma chain in readiness to pick up Jon and Hannah on Saturday night.  For once it looks like the winds will actually play ball and be from the right direction!
Newer Post Older Post Home