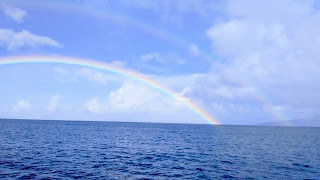 We had an interesting sail down to Guadeloupe at the end of last week when the depth guage suddenly started registering values despite us being in over 800m of water (it goes blank once the sea bed is over 200m below us). For between 5 & 10 minutes it started displaying depths ranging from 5.5 to 10.5m rather suggesting something was swimming along below us at the same speed, gently rising and falling as it swam along. It was a strange feeling: we looked over the side but couldn't see anything. Could it be a shoal of fish? Pod of dolphins? Whale? We'll never know as the depth guage suddenly went blank again and remained that way until we were approaching Guadeloupe and entering shallower water. All very strange .....

After an overnight stopover in Deshaies to have dinner with friends we sailed on to Les Saintes and here we've remained for approaching a week. Paul's canny approach for securing a mooring ball in pole position paid dividends once again (he comes over in the dinghy first thing and hovers awaiting boats leaving and then grabs the best one available until I bring Tumi over) so we're tucked away in a sheltered spot whilst the majority of the bay rocks and rolls in the swell. We've spent our time here snorkeling, relaxing and socialising with a number of friends and eating fabulous baguettes and creamy brie, all washed down with a nice chilled rose ... what's not to like?!  We've even resurrected writing a novel we started 3 years ago ... over 45,000 words written to date!

There's some very windy weather forecast for the weekend so we'll head south to Martinique early tomorrow morning and ride it out in St Anne.  As with Antigua we'll be saying farewell to Les Saintes but at least have been lucky enough to spend nearly three weeks here this season.

We dropped off Phil and Judi yesterday after a fun two weeks spent between Antigua and Guadeloupe.  Sadly the weather was pretty unsettled with quite a few rain showers but they returned home relaxed and with a tan.  Our last full day was spent enjoying the luxury of Sheer Rocks restaurant at the Cocobay resort ... relaxing on daybeds with a personal plunge pool to cool off in, drinking cocktails and dining on creative tapas ... a wonderful day with the turquoise Caribbean Sea as a backdrop.  What's not to enjoy!

So today is about laundry, reprovisioning, cleaning, communication, haircuts etc in readiness for sailing away from Antigua tomorrow morning for the very last time.  It will be a sad moment as we've loved our time on this island over the years ... we estimate we've spent approaching 6 months here in total ... but we're very excited about the adventures to come.

Running out of battery .... more later!

I caught a Barracuda the other day on our way south from Antigua. Everyone on board was so shocked, no-one managed to get a photo of my success. It was a good size, very healthy and full of teeth. Nevertheless, I managed to land it successfully, got the hook out of it's mouth and put it back to bite another day.

Since then we have been lounging around the islands in Les Saintes, snorkeling, dining well, drinking far too much, but then that's what cruising is all about. The islands here are simply beautiful, a great mix of culture, history, beauty and amazing snorkelling ... our favourite place in the Eastern Caribbean. 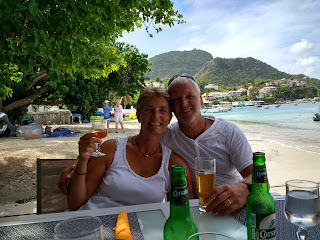 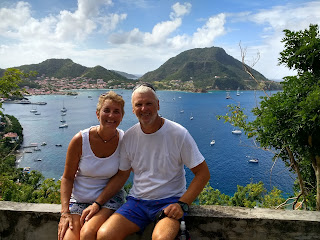 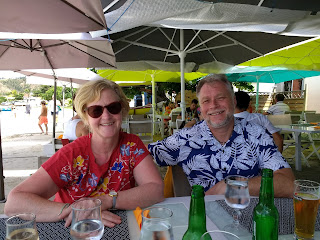 We've got to head north again soon but will be stopping off in Des Haies to visit the botanical gardens and hopefully hire a car to explore a bit of Guadeloupe.