After a night of heavy rain we awoke yesterday morning to clear blue skies and temperatures in the low eighties ... at last it feels as though we're back in the tropics!  So suitably attired in shorts and T-shirts we headed ashore to register with the marina and go an explore.

Unlike the uninspiring anchorages / mooring field which seem to be littered with derelict boats, the old town itself is great, quirky but with a buzz about it, a bit tourist trashy on the main street (Duval Street, apparently the only road that runs from the Gulf of Mexico to the Atlantic in a straight line ... it's about a mile long!) but some attractive wooden houses and a nice waterfront where we enjoyed a local beer or two whilst Paul watched the rugby sevens. 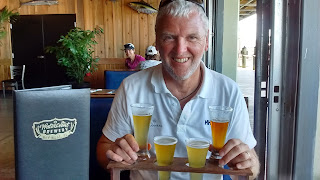 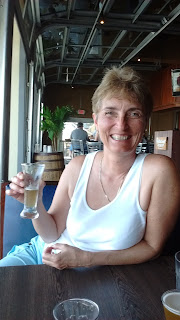 We also had a great lunch sitting in a pretty cool restaurant on Duval Street, enjoying the great cocktails .... the best mojito I've had since Puerto Rico in March 2013!  We'll definitely pay another visit to it before we leave. 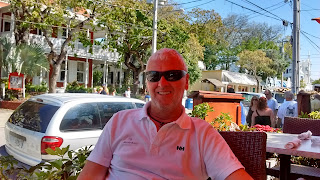 The weather for the next couple of days is forecast to remain warm and sunny so another day ashore exploring old Key West, including the fort, beckons and then tomorrow we're hired a car to drive down the keys to places we were too deep to stop at.  One of the linking bridges is 7 miles long so we'll definitely get as far as that.
Newer Post Older Post Home