After 37 hours at sea, the middle 12 of which were pretty unpleasant as we crossed the Gulf Stream in rough seas and high winds, we arrived in the Berry Islands as darkness was falling.  The last 4 miles on the approach was shallow so we had to be careful, no more so than at the entrance to the channel into the marina when we had only 10cm below the keel, and that was 3 hours after low water when there was already an increase in water depth of 40cm.  With Paul on the helm and me on the bow with a spotlight, vainly trying to find the channel markers, we made our way into the marina safely.  The welcome we got from the marina staff, and neighbouring boats, was wonderful and made it all worthwhile.

Our route from Key West to the Berrys had taken us east along the Florida Keys (good sailing) and then north east across the Gulf Stream to Bimini (of which more later) and then east from Bimini to Great harbour Cay (great sailing).  In 37 hours at sea we only had the engine on about 3 hours, and two of those were departing and arriving.  And now back to the Gulf Stream.  We know that crossing it when the wind is from the north is not easy, nor recommended, as with winds blowing to the south and a strong current running to the north, the resultant effect on the sea state is not great.  The stronger the wind, the bigger the seas.  Well the forecast was for pretty benign wind conditions and so we decided to go for it.  As usual the forecasters got it wrong and the 15 knots benign winds actually were 30+ knots gusting up to 40.  I'll leave the sea state to your imagination but even Paul described it as an unpleasant and uncomfortable crossing, and so speaks the man who is normally very positive about everything.  Tumi handled the trip brilliantly, no worries there, but neither of us got much sleep and so arrived last night exhausted.  Long trips with just two people is never easy but in rough conditions with a lot of commercial traffic plying the Gulf Stream, it was tough.

Today however feels like a different world.  From the warmth of the welcome to the unspoilt beauty of this little-visited island, everything is perfect.  The weather, the atmosphere, the marina ... nothing to mar a great day. We've cycled a fair bit of the island and visited a couple of beaches, caught up on a few chores, chatted to our fellow sailors in the marina and are very soon heading off to a chat 'n' chill lobster BBQ. 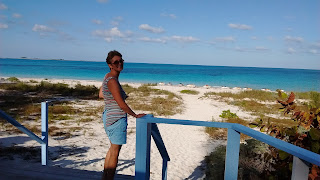 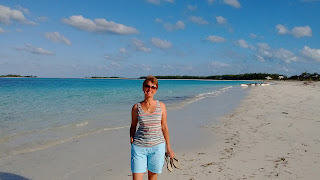 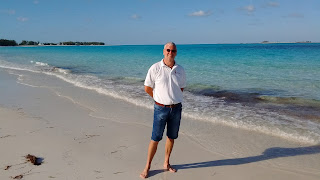 The BBQ was great fun chatting with other sailing couples and the food not bad at all.  One thing we discovered was the marina and surrounding properties were developed in the late sixties as a luxury resort, frequented by the likes of Brigitte Bardot and Jack Nicholson no less.  Sadly it fell out of favour and is far from the luxury of those days but it's still a great little island and place to be.
Newer Post Older Post Home