Having spent 2 very enjoyable nights in the marina at Great Harbour Cay during which we cycled around the island, walked on the beach and dined out at a "chat and grill" event where we ate barbecued food (lobster for Paul, chicken for Debra) and were the last people to leave the gazebo at the end of the evening - who said we are not sociable??? Sometime late in the evening I volunteered to cut someone's hair, and did so for Dean, the brave soul in the morning before we left. As it turns out it seems I did a pretty good job of it. Maybe a new career opportunity!

We navigated our way successfully out of the marina, the lagoon housing it and the narrow entrance which even in daylight was tight. 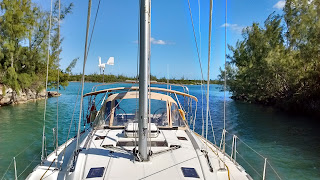 The sail across the bank from Great Harbour Cay was really good at first, the sun was shining, the winds were constant and we thoroughly enjoyed it. Later in the day as we neared the edge of the bank the winds dropped to nothing and we had to motor for a while.

Then last night, we crossed the "Tongue of the Ocean" - it is the strip of ocean that goes between Andros and the Exumas, a deep very stretch of water that we were reliably informed is used by the US navy for training their submariners. Thankfully we didn't run into any periscopes that may have been proud of the surface on our trip. We did however see a whale which was nice - the first one of 2016.

The weather forecasters got it wrong yet again, we were expecting 20 knots of wind, but inevitably were pounding along in 40 knots. The boat can take the high winds, but the problem is that the waters around the Bahamas are incredibly shallow (average depth 5 metres of less) and sailing in the dark means that we need to stick to well marked channels to avoid running into any of the myriad coral heads that frequent the Bahama Bank. Despite being well reefed so that we had mere handkerchief sized sails exposed to the wind, we were still screaming along at over 8 knots, not a speed to hit a coral reef at. Thankfully, because we were on a well tracked route, we could relax about the coral heads, but high speeds in pitch dark in shallow waters are still pretty scary.

We arrived at Highbourne Cay just as the dawn was breaking and we were able to see the rocky bits in the anchorage that we need to avoid. We will stay here and ride out the next weather front that is due this evening and tomorrow before heading further south through the Exuma chain.
Newer Post Older Post Home