We've had a busy few days, hence the lack of blog entry, visiting Big Major Spot to see the swimming pigs (photos to follow), snorkeling in Thunderball grotto and also visiting Cambridge Cay, a first for us too.  The weather was very calm for the first few days but returned with a vengeance overnight whilst we were at Cambridge Cay, far exceeding the forecasts and making it a bit of an hairy exit. 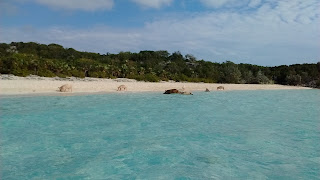 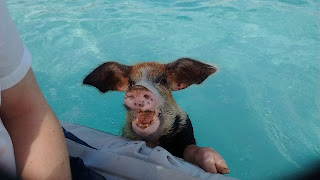 Cambridge Cay is simply beautiful being surrounded on all sides by pristine white beaches and turquoise seas ... what's not to like?  It is however one of those places a
where are deep draft means we have to leave the Bahama bank and re - enter the Atlantic side of the Exumas before cutting into it.  After our reasonably successful fishing endeavours of last week, we cast out the line again and almost immediately Paul reeled in a yellow - fin snapper, a 5 out of 5 in our eating guide.  He was only around 12" long though,  not really enough to feed 4, and so we threw him back to live another day.  Almost straight away another bite revealed an Amber Jack (a 3 out of 5 eater) but this was smaller still and so went back overboard.  Paul's still after the big Mahi Mahi that got away on the sail to Great Inagua ..... 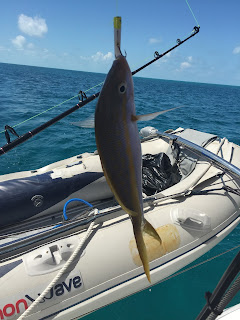 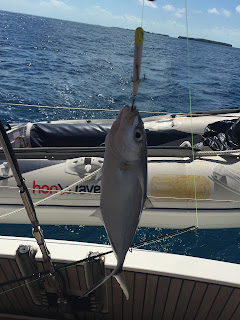 And now back to our departure from Cambridge Cay!  Despite being a sheltered anchorage, there was a bit of a roll and Hannah was feeling a bit head - achy so we decided to leave and hopefully find a calmer spot back on the Bahama Bank side of the island chain.  That meant exiting via the Atlantic and boy what an exit!  With a strong current flowing out and very strong  winds blowing in over shallow waters, the waves did cut up a bit and we were heading straight into them so it made for a rough ride to say the least. Fortunately we only had a couple of miles to do before we could cut back in to the Bank and much calmer waters.  After that it was a great sail and we nearly caught something big on the end of the fishing line but it broke the 50lb line and got away, lure and all.

So now we've been at Hawksbill Cay, part of the Exuma Land and Sea Park as is Cambridge Cay, for the last two nights with the clearest turquoise waters imaginable as far as the eye can see.  We had a great day yesterday hiking on the island for a couple of hours in the morning before enjoying an afternoon BBQ on the beach, this time without iguanas sizing us up. The only downside has been the continuing roll making sleeping not easy so we'll probably move on again today, hopefully to Warderick Wells if they have a mooring for us. 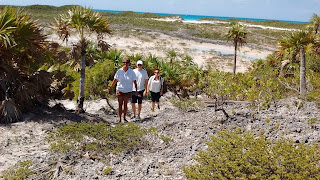 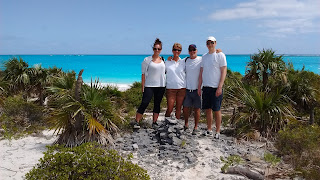 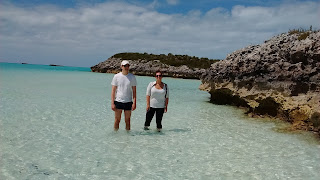 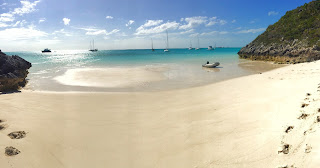 Only two more days left of Jon and Hannah's holiday now so we'll be Nassau bound tomorrow to make sure we get them back in time for their flight.
Newer Post Older Post Home