It seems no time at all since we left Key West for the Bahamas but just over 4 weeks after arriving in the Berry Islands, we departed New Providence for the sail back to Florida feeling a bit sad that this season's sailing was winding down.  We had hoped to break the 3 day passage with a stopover in West Palm Beach but looking at the forecast we realised a direct run would be more sensible and so 66 hours after departing we arrived in Fernandina in the middle of the night. Having been here before last November, we knew where to go and so picked up a mooring, had a very early breakfast and went to bed, shattered but glad to have made it safely.

The trip up was good: only 13.5 hours of motoring when the wind died, a smooth sea (unlike the crossing over to the Bahamas in mid - February the wind and current were in the same direction), warm and sunny weather and visits from dolphins along the way.  We didn't see many other boats but did witness an amazing lightning storm to the east of us over the Gulf Stream which lasted for hours. 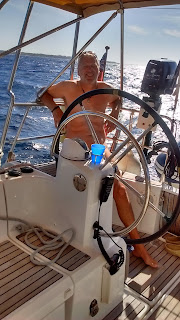 After clearing back into the States yesterday we spent several hours at the laundry .... not all glamour! ..... so now everything is clean on board.  The marina has a very pleasant members lounge so at least we were able to wait in comfort whilst the machines did their thing.  Paul also got to sample his long-awaited BBQ aligator ribs, postponed from last year when the restaurant was closed.  Apparently they were very tender and tasted a bit like veal .... I waived the chance to sample them! 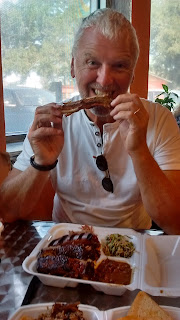 We'll be heading to the marina where we'll be leaving Tumi on Friday so have a couple of days R&R before the jobs of taking off the sails, packing, polishing the hull and wiping things over with white vinegar solution to detract mould from forming whilst we're away.  We won't be back out until the end of October which feels an awful long time to be not sailing but it will be lovely to be back on terra firma and spend time with friends and family .... not to mention closing Easton Court and overseeing its conversion into two houses.  It's going to be a busy few months for us but hopefully time well spent in terms of being able to finally sell the property and free ourselves up longer term for our ongoing sailing adventures.

We've travelled 2950 miles since we splashed Tumi back into the water in late September and have really enjoyed exploring the east coast of the USA from Annapolis down to Key West, and revisiting the Bahamas.  The friendly welcome of the people we have met, friends we have made along the way and interesting American Civil War and War of Independence history, together with the natural beauty of the Bahamas, has all made for a great trip.  Thanks for following us this season and we'll be back blogging around Halloween!
Newer Post Older Post Home