We had a busy day yesterday: joining a tour to see the local botanical gardens in the morning and the World ARC awards dinner for leg 5 (which of course we were disqualified from for not going to Suwarrow!) that evening.


We actually awoke to some blue sky, such a pleasant sight after almost a week of cloudy and at times very wet weather. Piling onto a coach we set off for the other side of the island where a former Tongan Minister for Agriculture has developed a botanical garden in what had been virgin forest. It's been his life's passion, cultivating native and imported plants and trees and as he escorted us around it was obviously still a big part of his life. 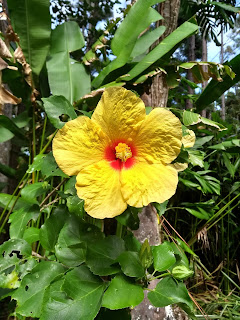 Driving across the island, passing through small villages, we were once again surprised how like parts of home it looked, give or take the odd palm tree, with cows grazing in meadows. 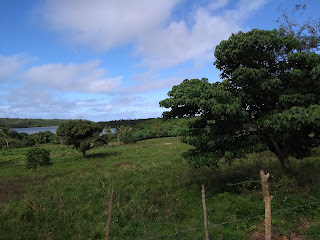 Sone of the land was cultivated where the major crop is a root plant called cava. After harvest this is ground down into a fine powder which, when mixed with water, forms a muddy-looking, earthy-tasting hallucinogenic drink which is very popular with the locals on many Polynesian islands. In fact we have needed to buy a few kilos of the stuff to take with us to Fiji where, when visiting inhabited islands, there is an expectation that we will take some along as a gift for the chief. Paul and I ended up with more than we needed and so we've travelled around the anchorage selling the surplus, rather feeling like drug dealers!


After touring the garden the rudiments of weaving, tapa-making and coconut processing by hand were all demonstrated to us. The palms from the coconut trees are woven into baskets and screens which are used for roofing, privacy screens, table cloths, matting and, after being dried and stripped, even traditional clothing. A very versatile plant indeed, especially when you consider how they use the nut itself for coconut water, dessicated coconut and coconut milk (from squeezing the shredded coconut in the fibrous husk to extract the liquid). All of the work appears to be done by the women, including making the tapa-cloth from repeatedly banging the stripped bark of a local mulberry tree with a wooden club. After a day of hitting a 10cm wide strip of bark, a 30cm wide length of cloth is produced which is reasonably soft and is used for clothing and blankets for warmth. The women need an awful lot of patience and arm strength to produce each piece. 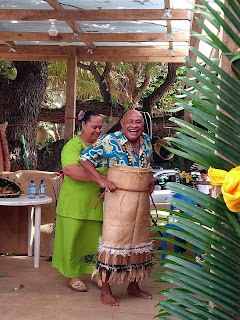 After a being served a local lunch (chicken curry, shredded beef in taro leaves, fish patties, karava cakes, rice etc) we were entertained by local dancers while our host and his friends got into the cava …. and appeared to get very mellow! Say no more!! It is traditional for the dancers to cover themselves in oil and the audience to stick currency to their limbs during the dance. The dancing itself is far gentler in style than that we have seen further east, more akin to the flowing movements of Hawaiian dancers in many ways. The accompanying music was also unusual and didn't sound very Polynesian to us! All in all an interesting few hours. 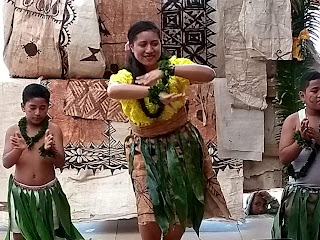 The awards dinner last night was a big event for the local Tongans with the deputy Prime Minister and Minister for Tourism attending, together with the dance troupe that travels internationally representing the kingdom and a local brass band! It was also a big night for the fleet being the last time we will all get together for an WARC event as 6 boats are dropping out in Fiji for a year, and a few tears were shed by the boats concerned. More local food, punch, chatting, laughter and prize-giving followed before we headed back to Tumi tired but happy. 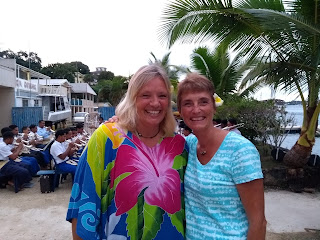 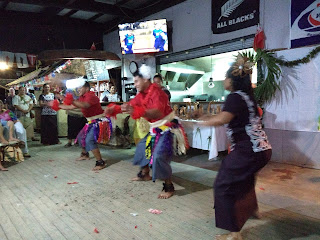 Yesterday, several of us went to church to enjoy the wonderful singing during the service. The choirs' voices made the hairs stand up on your neck. We left about half way through the service as we were taking up seats from local people and they were reduced to sitting or standing outside which didn't feel right. Many of us then went on a hike to the highest point on the island, involving a final climb of 189 steps to reach the pinnacle. 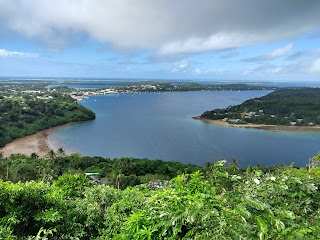 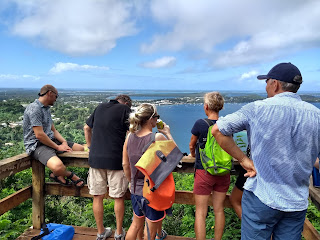 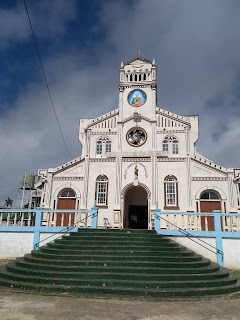 Last night one of our toilets blocked and refused to function. Repairing toilets is not a job we relish but we got stuck in and pulled out the waste pipe (not an easy task). It turned out to be completely choked with scale, no wonder it wouldn't work. An hour later we had broken out all the scale and flushed the pipe through. Reassembling the system went reasonably easy without the solid core preventing any flexibility in the pipe, and now we just have to rebuild the cupboards that hide access to the pipe.

Today is a provisioning, refuelling, and clearance day. Once that is done we will move to an anchorage nearby for the night so that we are ready to leave Tonga for Fiji in the morning - approximately 2 days sail.


We have made a decision about our future plans this week and have decided to remain with the rally and sail directly to Mackay this year rather than drop out in Fiji and slow things down. It will be nice to continue in company and have a few months cruising Queensland before flying home in early November. Lots of land-based adventures await including our first one in NZ for the first few months of next year and then back in Australia in the Spring.