Yes after another night of motoring we can see Niue on the horizon, 24 miles away. From this distance it looks flatter than I expected. Paul us still sleeping, catching up on missed sleep from 7 nights at sea, and I am on watch, multi-tasking (yes, I can!) with doing boat jobs so we will arrive with a clean and tidy boat, and full water tanks.


Paul caught a blackfin tuna yesterday afternoon which we enjoyed for dinner last night … he's still after the elusive Mahi Mahi but it's looking less and less likely! I just checked on the chart plotter and we have 2118 nautical miles to fish before we arrive in Australia so we may still be in luck! 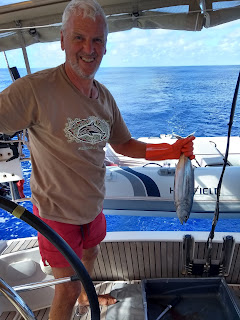 Next update will be from Niue!


We're down to less than thirty hours (185 miles) to go now and have been motoring for the last day and a half, give or take 4 hours when the wind returned and we were able to sail for a short while and turn the engine off. As suspected though, sailing resulted in us falling even further behind the two other boats, around 35 miles now!


Yesterday morning we decided to deploy the Parasailor. There wasn't very much wind but we felt we should give it a go for a number of reasons: it would enable us to turn the engine off; we would be able to see the quality of the repair made in Papeete; it would put to bed the bad memories of the last time we flew it when it ripped. So up it went, easily in the light airs, and we made slow but steady progress for a few hours until the wind dropped even further, insufficient to fill the sail. It still looks very impressive when it's full, and the repair looks good too!


Twice a day, every day so far we have our own small radio net with the other two boats. We are now out of VHF radio range and so are using SSB communications but it is good to touch base. We haven't seen another vessel for over 5 days, it's such a big and empty ocean, and it's rather comforting to know that there are two other boats not that far away!


After the first few days of high winds and big seas the Pacific is now as benign as you could imagine, with barely a ripple on the surface and an all but unoticeable swell. If the amount of wind we had for three and a half days could have been averaged out over the seven days needed for the entire passage we would have had near perfect sailing conditions. For some reason it never seems to work out that way!!


We caught a fish yesterday, a greeny yellow jack we believe (judging by it's markings) but we couldn't positively identify it as such and so threw it back. It wasn't a bad size and if it was indeed a jack then it would have made for good eating but it's better to be safe than sorry. Today's endeavours netted a black fin tuna. Dinner sorted for this evening!


We're under a bit of time pressure now to arrive in Niue before customs and immigration close at 15.00 on Saturday. If we don't make it then it's not the end of the world but would mean us remaining on board until they re-open on Monday morning. We've increased the engine revs to try and meet the deadline …..


It's day 5 of our passage from Bora Bora to Niue and to date the weather has been as forecast or thereabouts. The length of time we needed to motor initially was longer than we hoped, just over 24 hours, bit since then we have been able to sail on a beam reach and make reasonable time. That said, the other two boats in our mini-fleet have pulled away from us and they are now around 20 miles ahead. It's always difficult for boats of different length, sail configuration and hull style to match speed as we have undoubtedly proven this time! To be fair we have kept pace with them in daylight hours but we reef the sails down more heavily than they do at night and so only half a knot difference in boat speed results in 6 nautical miles difference overnight. Times 4 nights then the difference in distance is about right.


We knew setting off that we were skirting the edge of a big weather system to the south and it has generated winds in the high twenties, gusting into the thirties and heavy rain on occasions. With the high winds come bigger seas and so it hasn't been the easiest of sails, especially when it comes to trying to get some sleep! Throw in a couple of days of queasiness for me, then it's not been a favourite passage I have to say but we were warned by the organisers that this is usually the worst passage crossing the Pacific … something to do with the start of winter storms further south in the southern hemisphere which influence conditions where we are right now. They never mentioned that before we set off in January!!


We've also had a couple of issues with equipment on board, namely the whisker pole which we use to hold out the jib (front sail) when the wind moves to come from behind. We deployed it as usual on day 3 but when the wind moved we needed to change it to the other side of the boat. In making this change the claw on the end of the pole that attaches to a ring on the mast snapped off, allowing the pole to swing wildly on the deck. We both went forwards to capture it and we're able to lie it on the deck alongside the guard rail to which we fastened it for safekeeping. Fortunately this happened in daylight, so much easier than if it had been at night.


Overnight we chatted about how we could jury-rig the pole using dyneema soft shackles and so yesterday we effected the temporary repair. It involved Paul having to go up the mast to retrieve an errant line - not the easiest of tasks in rolling seas but he managed it without incident thank goodness. We didn't need to deploy the pole that day as the wind had moved back to around 100 degrees off and so we could sail well without it.


Today the winds have eased, and with them the sea state, and the sun has put in an appearance. The winds also backed to the east once again bringing them from directly behind us so it was time to deploy the whisker pole to hold out the jib to catch as much wind as possible. The new jury-rigged arrangement involved us both going forward onto the moving deck but we managed to get the pole in place and return to the cockpit.


And then disaster struck twice. Firstly the jib sheet snapped, allowing the jib with the pole still attached to flail around. Paul hurried forward while I wound away the jib, pole still attached, and we started the process of replacing the jib sheet. As when the portside jib sheet snapped during the heavy weather sailing from Santa Marta to the San Blas islands back in January, we had to use mousing rods to feed the replacement job sheet under the deck mouldings but in no time we had it fixed and the jib poled out once more.


And then the second disaster to hit us today: , when we needed to move the pole again an hour later the claw on the other end of the pole snapped! We're not exactly sure why, maybe the wild swinging when the jib sheet snapped caused it, but Paul suspects it's because the mast fitting is now bent and the claw isn't able to move along/around it smoothly. So once again we lashed the pole to the deck and had had to revert to sailing without the benefit of a poled-out jib.


Sadly for us the angle the wind is coming from meant the jib was just flogging and so we had to wind it away and are now making way with just the mainsail up. It's slow old progress but we'll persevere overnight (falling even further behind the others!) and see what tomorrow brings. If the winds remain light and from behind us we may well deploy the newly repaired parasailor but are somewhat wary of Paul's shoulder should it need to be snuffed quickly in high winds. Alternatively we can try to jury-rig something on the other end of the pole and try to pole out the jib once again. Our third and last option would be to motor the rest of the way (about 350 miles) but we'd prefer not unless the other two options are no go, and/or the wind drops altogether.


One thing this particular passage is doing is make us question how much longer we want to continue with our ocean-going sailing adventures. It's hard work and things do seem to go wrong all the time, which is very wearing but not surprising given the harsh environment and stresses and strains yachts are put under. No decision as yet but we may decide to continue straight on to Australia with the rally rather than dropping out in Fiji and slowing the whole pace down. We'll see when we get there ….