The weather forecast made a trip to Monserrat to let Jon and Hannah see the devestation caused by the volcano a possibility so after fitting the new windlass (well done Paul, and thanks to Quick for sending $1300 worth of replacement parts under warranty) we sailed the four hours over to Little Bay on an island where about two thirds remains an exclusion zone.  As we approached the anchorage we got a length of rope joining two lobster pots wrapped around the prop so Paul had to dive in with a knife to cut it off.  Such a versatile chap!

Since we were last there, some of the island has been re-opened so we were able to visit places that were last time out of bounds. 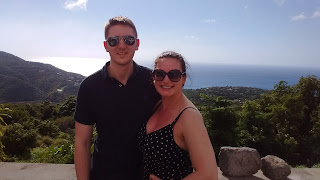 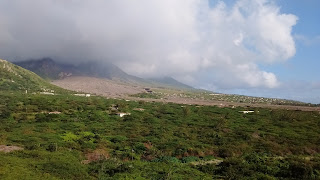 After an informative 4 hour tour we returned to Tumi and spent a very rolly night at anchor .... no-one slept well at all.
Newer Post Older Post Home